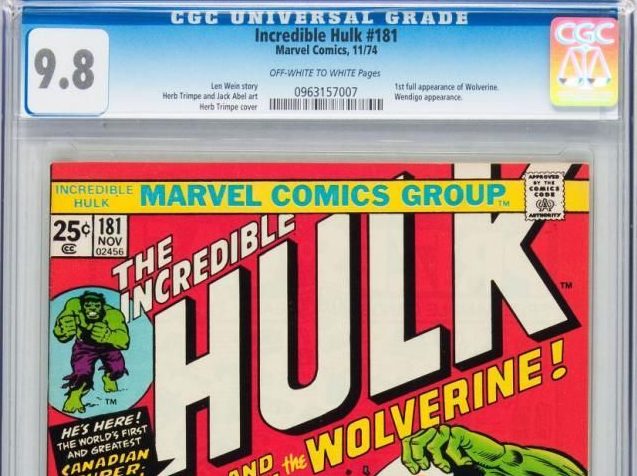 What Affects A Comic Grade?

AlphaComics has been doing CGC submissions for quite some time now.  This article is meant to help those of you who either are new to submitting books or are curious about why a specific grade may have been given.  It’s important to note that the information in this article more of a guideline rather than hard and fast rules.  If you are unsure of the grade you will get, then submit your book for review first (pay a small fee to know what the grade will be, then decide what you want to do).

If you are new to the CGC process, please read What Is CGC? Is it for you?

What Causes My Grade To Go Down?

There’s a ton of items that may affect your grade.  I say “may” as the grading process is not a checklist.  Professional graders review your book to see if a specific flaw if found, affects the overall value of the book.  The same book submitted more that one, in the same condition may come back with different grades.  The more items you have in your book, the lower your grade.  A general guideline would deduct half a grade for each item you find to get an idea of where your grade will be. 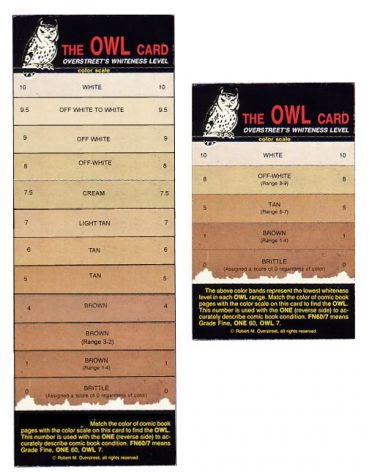 BROWNING: Paper that has aged to the stage between tanning and brittleness

FOXING: Tiny orange-brown that appears on the cover and/or interior pages of a comic book that is caused by mold.

YELLOW PAGES: Most older books have this issue which is why you rarely see high grade pre-80s comics.

PAPER LOSS: When the surface of a comic has been compromised as the result of heavy scuffing/abrasion, accidental tape pull, or the chemical reactions caused by some kinds of moisture damage.

PAGE COLOR: The color of pages relative to the original known color.  See the OWL scale.

CENTERFOLD: The stapled, four-page middle sheet of a comic.

COUPON CUT/CLIPPED: A comic book that is missing a coupon.

REMOVED OR LOST PAGES: Pages that have become detached or are missing entirely.

GLASSES DETACHED/MISSING: The special red and green cellophane glasses which originally came with a 3D comic are not attached.

NO COVER: The cover is missing.

CLEANING: A process to remove dirt and dust, usually done as dry cleaning.

COLOR TOUCH: A restoration process that uses ink, marker, acrylic, and such to fill in areas of missing color on a comic book.

NON-ORIGINAL COVER: The cover has been replaced.  Not much of a restoration, more of a process to sell a comic to someone who may not notice the modification.  This will give the comic a No Grade (NG).

COVER REATTACHED: A Repair in which staples or glue have been used to affix a cover to the pages or binding.

PAGES TRIMMED: A cutting tool has been used to trim one or more edges of a comic. 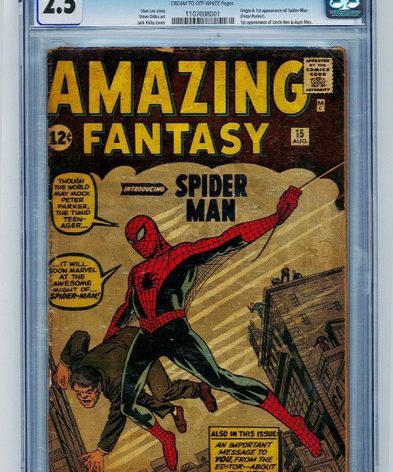 COVER DETACHED: A cover to a comic book that is detached from the interior.

CREASE: A heavy fold in the paper that can break the color of any comic book art.

DUST SHADOW: When part of a comic book (usually an edge) has been exposed to dust particles over an extended period it creates a dark stripe.

SUN SHADOW: A defect that appears as a dark stripe along an edge of a comic book cover. It is caused by prolonged exposure to light.

RAT OR MOUSE CHEW: Damage to a comic book that was caused by gnawing rats and/or mice.

SPINE ROLL: A defect of a comic book caused by improper storage that results in uneven pages and the bowing of the spine.

STRESS LINES: Tiny-to-large bends on or along the spine of a comic book, that may or may not break color, usually resulting from mishandling.

BINDERY TEAR: A small horizontal rip in a comic’s cover that can usually be seen on both the front and the back.

DENTING: Indentations or dimpling (usually in the cover) that don’t penetrate the paper or remove any gloss, but do interrupt the smooth, flat surface.

SCUFFING: A light paper abrasion that may or may not break color, but interrupts the surface gloss of the book. Its effect on grading is determined by severity.

SPINE SPLIT: A clean, even separation at the spine fold, commonly above or below the staple, but can occur anywhere along the spine length.

STAPLE MIGRATION/STAPLE RUST: When staple rust exists and/or has moved onto the surrounding paper, causing staining.

ABRADED CORNER: Corner area is rough. May include the extreme edge of a corner or cover area around corners.

COLOR FLAKE: Color has been flaked or abraded away in an area greater than 1mm in diameter. In a color flake, the white paper beneath the color layer is visible. When small, these are sometimes difficult to differentiate from INK SKIPS.

COLOR FLECK: Color has been flaked or abraded away in an area less than or equal to 1mm in diameter. In a color flake, the white paper beneath the color layer is visible. These are sometimes difficult to differentiate from very small INK SKIPS.

CORNER BLUNTING: Compression FOLDS at approximately 45 degrees to the ends and sides of the comic as if the corner of the comic were dropped against a hard surface.

DIRTY: Foreign substances adhere to a cover or page. Also known as SOILING.

FADING: Color has faded on one or more covers because of exposure to sunlight or another source of ultraviolet light 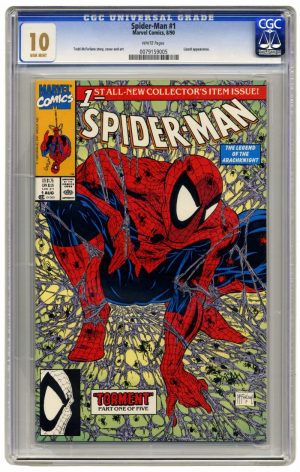 TAPE RESIDUE: Where cellophane tape has been removed, you may find residual adhesive substances that have penetrated paper fiber. These substances yellow rapidly and attract and bind dust and other particles.

MOTHBALL SMELL: A comic smells like mothballs after it has been stored with them for a while.

BINDER HOLES: Holes punched into comics to fit them into a three-ring binder.

WRITING: Any non-production writing on the comic (including autographs that are not done through the signature series process).

FINGERPRINTS: When finger oils left behind from everyday handling remain on a comic’s surface, they can begin to eat away at the ink, literally creating color-breaking fingerprints on the cover that are sometimes distinct and sometimes smudged.

WATER DAMAGE: The damage left behind when a comic has been exposed to moisture (directly or environmentally). Water damage often presents with staining and/or a stiff or swollen feel to the paper.

PRINTING/MANUFACTURING DEFECT: A defect that was caused by an error in the printing process, such as paper wrinkling, miscut edges, misfolded spine, untrimmed pages (Siamese pages), off-center trimming or inks, and misfolded and misbound pages.

SUBSCRIPTION CREASE: A large crease down the center of a comic book caused by the folding of a comic for mailing. Considered a defect.

DOUBLE COVER: Technically a printing defect, double-cover books had an extra copy of the cover stapled on during manufacturing.

COCKLING: Bubbling on a cover’s surface (typically a printing defect).

BOUND SHORT: Also known as JOINED PAGES or SIAMESE PAGES. This is a bindery error where the pages are not separated along their right edges.

INK SKIP: A streak or blank spot where ink was not applied during printing.

MISWRAPPED: The staples and spine fold were not placed correctly on the cover. Part of the back cover appears on the front or vice-versa, and the right edge of the book may be uneven from front to back, or vice versa.

PAGES OUT OF ORDER: The pages are bound in the wrong order.

Items Often Miscategorized As A Defect

Some defects are not necessarily bad.  The defects below are considered either non-invasive or normal manufacturing processes.

DISTRIBUTOR STRIPES: Distributor’s often color code comics for efficient distribution. These stripes are typically about 1″ wide and can be found on the top edge of the book. They are often blue, green, red, or yellow. Distributor Stripes are not a defect.

PRESSING: The process of removing dents, spine rolls, folds, and dimples through a dry press process.

PERFORATIONS: Small holes at the page margins which sometimes occur as part of the manufacturing process. Not considered a defect. Perforations are sometimes used to tell if a comic is an unread copy. In such a copy tell-tale clicks are heard when the book is opened for the first time as the perforations separate.

PRINT THROUGH: This is not necessarily a defect. The term refers to a cover through which you can see the printing on its reverse. Very common on WHITE COVERS.