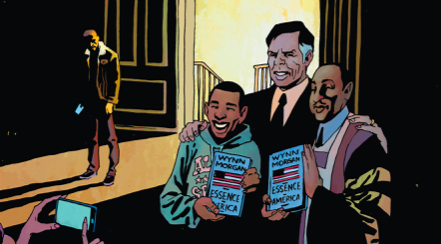 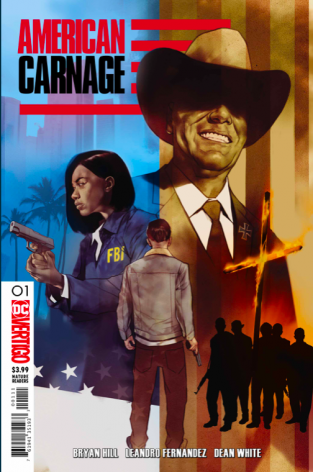 From The Publisher: “A new, thrilling crime saga from the writer of WILDSTORM: MICHAEL CRAY and the artist of The Old Guard! Disgraced FBI agent Richard Wright is offered a chance for redemption when his old mentor sends him undercover to infiltrate a white supremacist group believed to be responsible for the death of a fellow agent.”

A little background on the writer of this book.  Bryan Hill has been a super sought-after talent in the last few years.  He’s written screenplays for Gone and Just Cause 2.  He’s worked with Image on Cyber Force and Aphrodite V.  Bryan has been busy with DC on the Michael Cray series as well as several Batman books.  He was previously announced to take over Detective Comics as of #982 but that appears to have changed without fanfare to someone else.  Bryan has indicated on his twitter account that his involvement with Detective Comics is just slightly delayed.  So this guy is seriously involved with the scene.

This book really hit me like a punch to the stomach.  It is a tried and true crime drama.  However, the basis for the story is based on the state of current media.  In this time of MAGA (Make America Great Again) AKA The Trump presidency, there are some seriously bad things going on.  Racism.  Murder.  Extremism.  Cover-ups.  This book covers this head on.  As a result, this book is not for kids.  The language is strong (although appropriate to the story) and the visuals are very strong.  The story should make the average reader uncomfortable with the current state of the world.

The art is rough and moody.  While there are times where there were some oddities with the artist’s rendition of faces (a weird lack of consistency), this doesn’t detract from the overall presentation.  The colors are what make this book cool.  Flashbacks have a dark monotone hue to them.  There’s even a slight blur to the image.  One of the best uses of these graphical “tricks” to portray a scene type.

While overall a well-written book, the story may be a little too real for some readers.  That’s not a bad thing necessarily, but it will limit the potential audience on a book like this.  If you’re on the fence about this one, pick up book one.  I see no reason why the continuing series will be any different – and that consistency should keep fans on board.