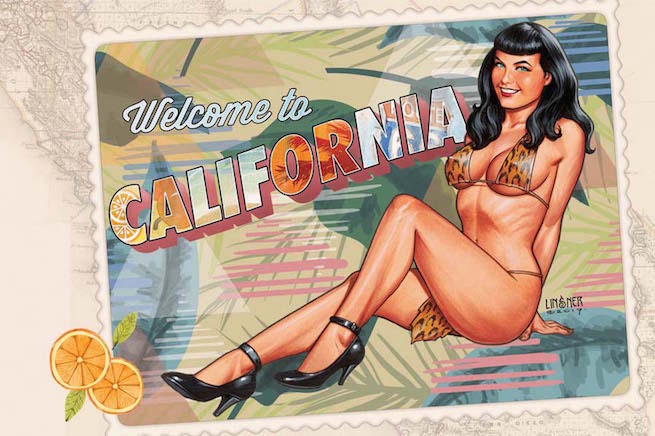 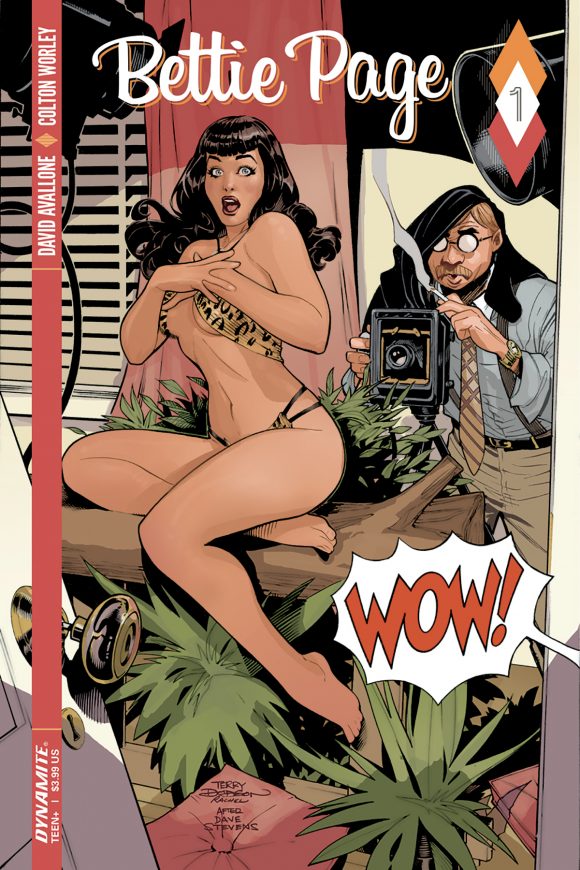 Bettie Page was an american model well known for her pin-ups and other body shots back in the 50s.  Her nude or almost nude shots were seen in such magazines as Wink, Titter, Eyefull and Beauty Parade.  So what I’m saying is this comic is based on a real person.  This comic is working to convince you that she had a secret life.  You know.  Before she became a christian missionary and evangelized with Billy Graham.

The idea is this: Bettie is a happy-go-lucky model and in the middle of a photo shoot the FBI show up.  She get’s the h-e-double-hockey-stick out of there and meets Rick Chaplain.  Rick has an idea that Bettie can hold her own and takes her off to his compound to become his assistand.  Rick’s previous assistant went missing.  Bettie soon finds herself in the same predicament…

The book is a cute look at the 50s and carries with it all the tropes associated with the particular moment in time.  It starts out looking like a story with a strong feminine lead.  It ends with the classic damsel in distress rescued by the hero.  It’s predictable.  With so many great strong female characters out right now: Wonder Woman, Lara Croft, etc – this shows none of that depth.  Reading the preview of this book it sounded like she was a spy or something.  Nope.  She’s an assistant.  Who is a secretary.  Resulting in a very two-dimensional story.

This is written by David Avalone who is a filmaker turned comic writer.  Twilight Zone, Pershing Project and Doc Savage are part of his wheelhouse.  The art is the best part of this book. The style looks like a charcoal drawing with a beautiful wash of watercolour for the background hues.  The artist is Colton Worley – best known for his work in The Shadow.  And as a added bonus – cover A is done by the Terry and Rachel Dodson.

If you are into period books then this might be for you.  Additionally, a fan of Bettie Page would definitely by waxing nostalgia for this book. Its not the first time there’s been a Bettie Page book.  If you are looking for a deep story or ground-breaking characters… check out Saga or another local book.