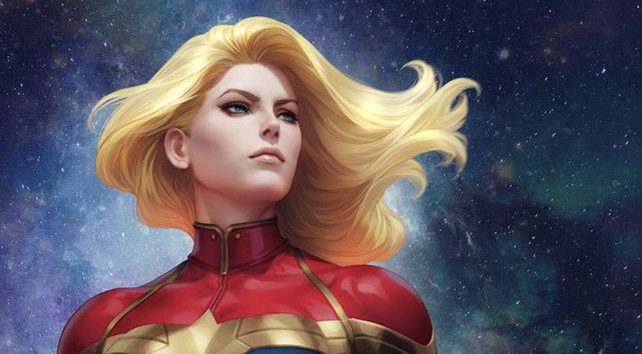 From the Publisher: “As Captain Marvel, Carol Danvers has spent months in space protecting Earth from alien threats big and small, but now it’s time for Earth’s mightiest hero to come home. New York City has never looked so good. But every re-entry comes with the unexpected, and Carol is about to hit a whole lot of unexpected. It’s a fresh start and an oversized, star-studded welcome home for a hero who’s been punching the glass ceiling since the 1970s — and just in time for the first female-led film from Marvel Studios! The next 50 years of Captain Marvel starts here!”

Hailing way back to 1967, Captain Mar-vell of the Kree Imperial Militia was created by Stan Lee and Gene Colin. Marvel Super-heroes #12 was the first official appearance of the character. The Captain would also go by several names over the years for their real persona. Monica Rambeau, Genis-vell, Phyla-vell, Khn’nr, Noh-Varr and our current protagonist Carol Danvers all held the mantle.

The one thing I’ll give this book right up front: it might be the most natural dialogue I’ve seen in a comic book. In my first read through, there wasn’t one time that I stopped to recheck what I read. The verbiage is current without trying to be hip (or whatever the kids say these days). Kelly Thompson has a knack for a lot of words on the page that don’t “feel” like a lot of words.

I do love the fact that this book also gives fans of other characters an “in.” With appearances by Iron Man/Tony Stark, Thor, Captain America, and Spider-woman; it feels like you’re jumping into something familiar. The book sets up the character without completely rehashing her history. That’s been written before and I’m sure we’ll see it extensively in the movie.

The generic worry going into a female-led book run by a very feminine creative team is that it would be rather one-sided from that standpoint. No need to worry about that here. This book is accessible across the board and should be enjoyed by everyone and all ages. And it appears that this book is taking Captain Marvel in all new directions by the end…