Home Reviews Reviews from the Dark Side Conan The Barbarian #1: Bring On The Blood Drive
Facebook
Twitter 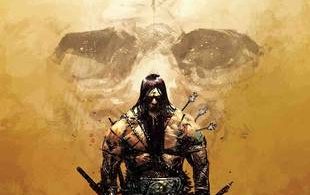 From the Publisher: “From an age undreamed…hither came Conan the Cimmerian, black-haired, sullen-eyed, sword in hand, a thief, a reaver, a slayer, with gigantic and gigantic mirth, to tread the jeweled thrones of the Earth under his sandaled feet… Robert E. Howard’s creation returns to comics, in an epic tale as only MARVEL could bring you!  Conan’s travels have brought him to the far reaches of the unknown, from his birthplace in Cimmeria to the kingdom of Aquilonia and all in between. As his fighting prowess allows him to carve his way through life, so too does it attract the forces of death!”

First published back in 1932 in Weird Tales by Robert E. Howard, Conan has been a pillar of fantasy fiction. Since 1970, there’s been almost a non-stop flow of Conan related comic books. For years, Marvel held the sword high in its retelling of the hero’s journey. In 2003, Dark Horse took on the mantle with local artist Cary Nord at the helm. They ran Conan until the slayer series a couple of years ago with Cullen Bunn. Now it’s back at Marvel with Jason Aaron who recently us a newly revamped Thor, not unlike the Conan world he now writes.

This book is an epic retelling of a snapshot of a thread of Conan’s life. Conan starts out as a barbarian warrior, takings on battles in the ring for money. In one of these battles, he meets a woman who turns out to be a witch, bent on bringing back a long-dead demon/god from the grave. After defeating her, the book moves forward to Conan the King after one of his many battles. Conan’s past has come back to haunt him…

Conan is seriously old school. The art by Asrar is a color by mood and intensity style. Battles and glory are fiery red and orange with the somber scenes blue and grey. It’s cool without feeling like the Asrar is trying to be retro. The story is intense and Aaron’s previous experience with the Thor prose and form help Conan’s dialog and commentary shine.

The only issue I’ve had in the past with the Conan books has been the confusion created by the variety of titles available. It appears that Marvel is doubling down once again to obfuscate the Conan brand. In just this book alone, they advertise Gerry Duggan’s Savage Conan and Tini Howard’s Age of Conan Belit. The problem with this concept is these other books tend to be COMPLETELY DIFFERENT from the main story and serve only the most ardent of Conan fans. Casual readers who pick up these other books can feel disconnected from the character. When you feel this way you lose interest in the entire thing.

If you are a fan – pick it all up by all means. However, you casual readers out there, keep your focus. This book feels like it leads a good story. Stay on that train and take a quick break from the regular comic book fare – even for just a few minutes. Definitely a book to add to your pull list this week.