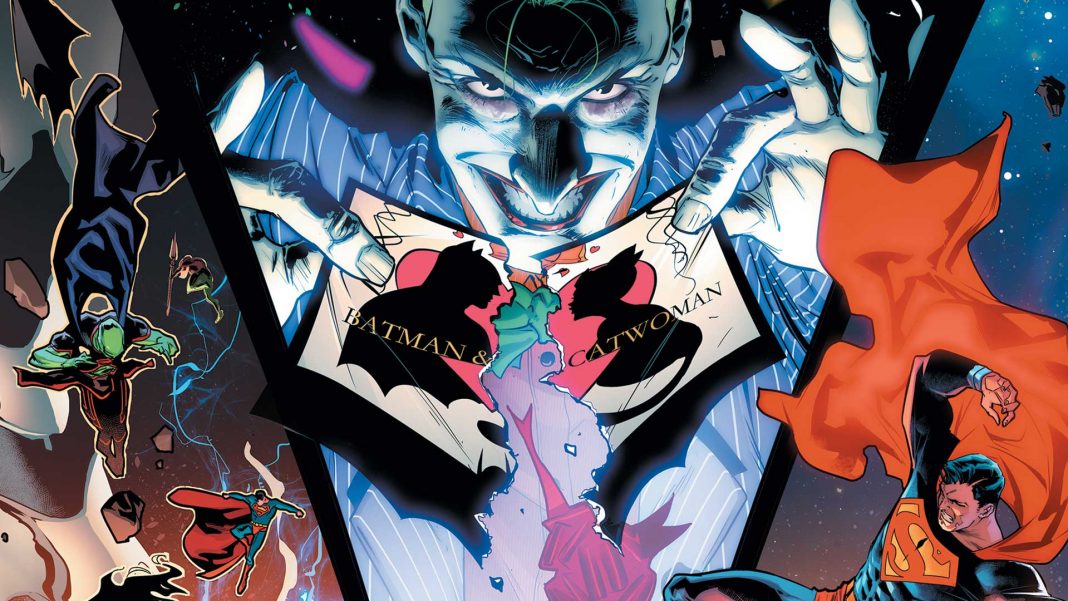 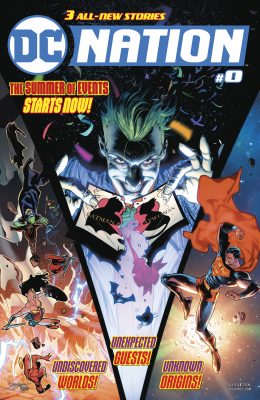 bloodying up your friends knuckles, so it’s nice to be able to use one as currency every once in awhile. Especially when it can be used on a good old story packed comic book. DC Nation #0 is a nice cheap sneak peek at the upcoming events guaranteed to heat up your summer.

This book gives us three short preludes to the upcoming events that’ll be taking place across the DCU this summer. The first story is written by Tom King and illustrated by Clay Mann. It is a totally twisted, totally entertaining tale starring everyone’s favourite clown prince of crime. The Joker is eagerly awaiting his invitation to Batman’s wedding, and no one hopes he gets it more than the homeowner he just took hostage. This story is fantastic! It’s a creepy look into the mind of a madman. I personally found it hilarious, but I’m not sure what that says about myself. King does a great job expressing the madness that is the Joker in this quirky/dark little story. Clay Mann has a art style perfect for this darkly toned one-shot, if you don’t agree then maybe you didn’t see the second last panel on page 5. That creepy @$$ face will be burned into my memory for decades

The second tale is a prelude to The Man Of Steel, written by Brian Michael Bendis and illustrated by Jose Luis Garcia-Lopez. It’s a fun little story that gives us a look at an average day in the Daily Planet Bullpen, as well as introduces a potentially important character in the upcoming mini-series. Many people can’t wait to see what Bendis will bring to the world of Superman. However, if he can keep up the pace he’s been setting so far, I expect he’ll do great things.

The final story is a prelude to Justice League: No Justice. It’s a collaboration between Snyder, Tynion IV, Williams, and Jimenez. It gives us a tiny look at some of the new Justice League teams. Even though they will most likely change again by the end of No Justice. It gives a glimpse of the world ending threat that forced the creation of these teams in the first place. It’s a fast paced little story with lots of fun action scenes, and fantastic art and coloring. There is a lot to look forward to from DC, but I think the new Justice League stuff should be at the top of the list.

What The What Is DC Nation? 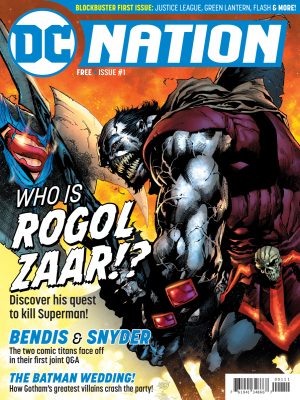 your favourite books, as well as bring you sneak peeks, interviews, and DC related news. This sounds like it’ll be a good way to keep on top of all things DC. Plus free is a even better price that 25 cents. Until #1 comes out though, make sure to grab this issue 0. That way you can check out these great little original stories that you won’t find anywhere else.