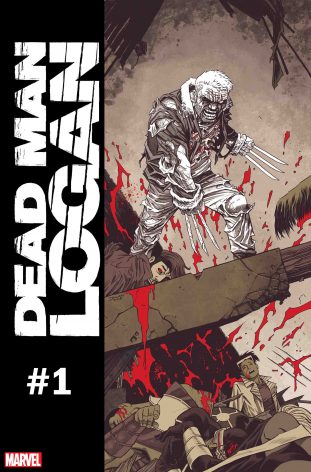 From the Publisher: “DEAD MEANS DEAD. The writing’s been on the wall for months now… Logan is dying. And he ain’t getting any better. Sick from the Adamantium coating his skeleton, his search for a cure has led to nothing but dead ends. But for once he’s actually trying to leave this world with some unfinished business… Can Logan take his last breath without slaughtering the X-Men again? Not if Mysterio has anything to say about it…”

Logan has been beaten, bruised, killed, reborn and beat up again.  And most of that has been just since his resurrection at the hands of Charles Soule in recent months. With a shaky start with the adamantium one-shots, the return of the guy that may be known as Wolverine has been gaining steam. Now, after jumping over from an alternate future/universe, he’s a broken man after having his butt handed to him by Maestro.  The Blob and the X-Men take him back home to get him back up to speed. However, he’s got his mind on other things – and that includes killing Mysterio!

Mysterio In An X-Men Book!

It’s an interesting turn for Ed Brisson to take Logan into the Daredevil/Spider-man territory with Mysterio.  However, when you are jumping from alternate realities, nothing is off the table.  Since we’ve not had Mysterio in those other stories for a while, this dab into fantasy is a strong start to the twelve issue run of Dead Man Logan.  Don’t let the cover throw you off this book: it’s not another zombie knockoff with another Marvel character.  Logan is very much alive.  However, he has an expiry date so I would imagine that this 12 issue run covers off the 12 months or so that he has to live.

There’s also enough humor in this book to offset the dark nature of Logan’s mission.  The scene with Blob and the laptop was cool.  And the art (minus the misleading cover) is actually really cool – certainly more reminiscent of Amazing Spider-man than X-Men.  With such a strong start, this would be a good book to add to your pull list so you don’t miss any part of the story.  So many of Marvel’s books don’t go to second print nowadays so don’t miss this one!