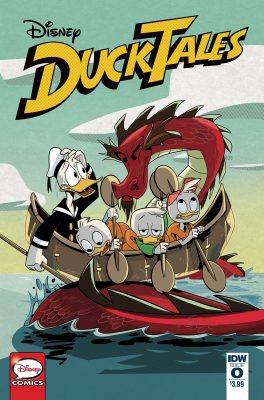 Are you ready for tales of derring-do bad and good? Are you willing to solve a mystery or rewrite history? Do you agree that life in Duckburg is like a hurricane? If you answered yes to the above questions, then you are in need of some DuckTales (woo oo). That’s right friends, it’s time for a blast to the past. Back to the days of our youth, when gargoyles fought crime, bears flew planes, and ducks went on treasure seeking adventures.

If you’re not familiar with DuckTales (woo oo), here’s the quick run down. DuckTales (woo oo) was originally a 1987 animated series that featured the adventures of Donald Duck’s Nephews Huey, Duey, and Louie, and their granduncle Scrooge McDuck. Who were usually (if not always) aided by pilot Launchpad McQuack and Webby (the granddaughter of Scrooge’s maid Mrs. Beakley). More often than not these adventures were brought about by the greed induced treasure lust of Scrooge, who would drag the crew all other the world in search of riches. If you want to go even further back, the DuckTales (woo oo) show was actually based on the Uncle Scrooge comics created by Carl Barks in 1947. Barks was also credited for creating Duckburg and a majority of it’s inhabitants like the Beagle Boys and Gyro Gearloose.

This comic is a set up for the new DuckTales (woo oo) series which comes out this August. I can hardly wait! Luckily for m 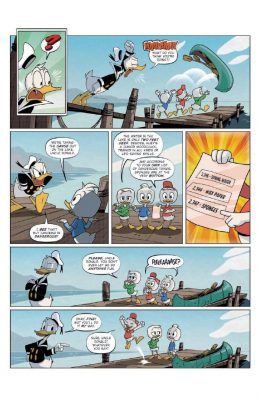 e and those like me, we have this new comic to tide us over ‘till then. DuckTales #0 is written by Joe Caramanga with illustrations by Andrea Greppi and Gianfranco Florio. Issue zero gives us two short duck-filled adventures starring Huey, Duey, Louie, and their uncle Donald. Both stories are funny and reminiscent of old Donald comics and cartoons. Our old pal Donald tries to work hard and be a useful employee. However, his anger issues and his trouble seeking nephews make that overly difficult.

To save you from being disappointed, I’ve decided I must spoil something for you. . . But Scrooge is not in this book. Gasp! My guess is he’ll appear next issue after the series has debuted. Perhaps episode one has them meeting Scrooge for the first time, but we won’t know ‘till August. Even without old Scrooge, this book is worth the look. Funny well crafted stories, and fantastically cartoony art. The art gives a modern look to the old Barks comics, but still captures the colourful wackiness that made them soo much fun to read. Also, this is the same style that’s in the new cartoon, so hopefully you like it or you show stick to reruns.

Fun For The Whole Fam-Damily

If you’re looking to recapture your childhood, or to share some of it with your kids, this is the perfect book for you. It’s appropriate for youngsters but still contains jokes for all audiences. The ultimate book to introduce your mini me to. J 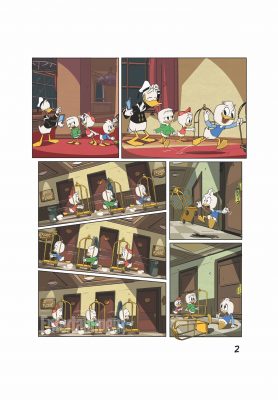 ust remember, if you actually want it to be a part of your collection, you should probably buy two. Or more scotch tape. Also, if I’m right this series will tie into the TV series. So if you want the full Duckberg experience you should throw this on your pull list so you don’t miss an issue. I bet this will turn out to be an exciting series, you won’t want to miss out on the fun excitement and d-d-d danger! So grab onto this issue on DuckTales woo oo!