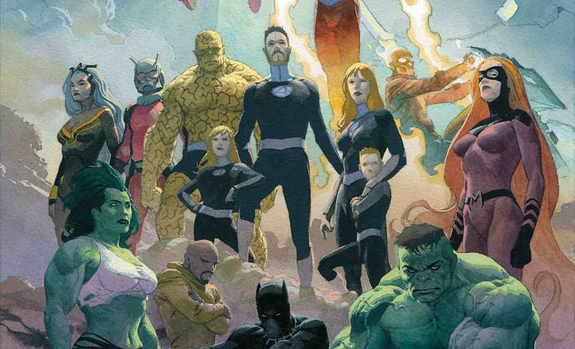 From the Publisher: “What have Reed, Sue and the kids been up to all this time? What adventures have they been on? All these questions [and more] will be answered… just in time for ENTIRE UNIVERSES TO DIE!”

When we last met part of the team in issue #1, we were sadly left hanging.  There was a pretty questionable decision to bring back only Ben and Johnny in the restart.  And it’s great that Marvel poked fun at the decision by having a Skottie Young short pointing out the fact.  However, this doesn’t cover up the fact that it was wrong and should not have been done.  This isn’t the new economy – getting two where we used to get four.  This was stupid.  The book should have been a double book that included this story.  That would have made WAY more sense.  If Deadpool books can have 3 stories in them that have very little to do with the title character, there’s no reason this couldn’t have been bundled together.

The Fam is OP!

OK – rant over.  Here we are at Part 2 of the reintroduction. The story is the other side to the story from the first book.  The Richards family has been off having adventures.  This includes creating new universes from scratch and visiting said new location.  A god-like superpower that seems a little overpowered for this family.  They can create universes, but can’t go back and visit Ben and Johnny?  Plot hole.

However, the story gets back on track to explain to the reader how the FF signal showed up to the other two.  And without wrecking it for you, the ending to this book gets BIG in a hurry.   So minus the plot hole, this is a good build-up to the upcoming story.

I can’t overlook the lack of a double book to start off Fantastic Four.  It feels like Marvel had so little confidence in their FF4 comeback that it was split up so they had shorter (and cheaper) books.  The argument that there were too many variant covers to have that big a big is not defensible.  Action Comics #1000 and Spider-man #800 broke the concept wide open.  Also – stop using light grey text on white speech bubbles.  It’s not an artistic choice – it’s an aneurysm waiting to happen.