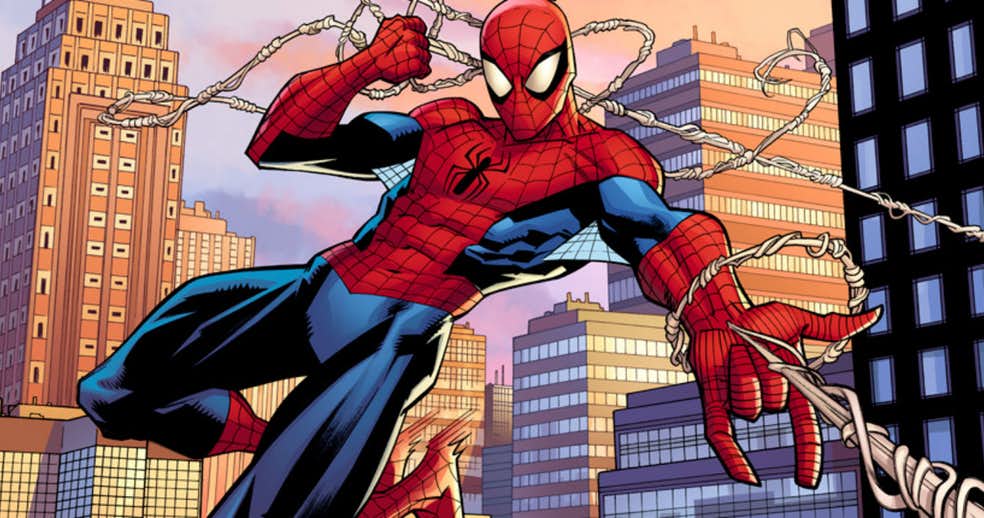 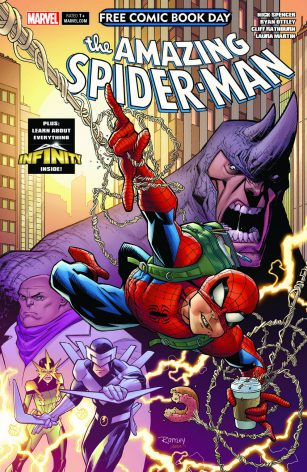 Over the last few months, we’ve been treated to a resurgence of sorts with good old Spidey.  With Peter Parker, Chip Zdarsky jumped through time with #300.  And the buildup with the main-line book through the Osbourne/Red Goblin lead to #800.  As we here at AlphaComics.ca know: #801 will be the ASM swan song for one of Spidey’s most prolific writers, Dan Slott.   With Free Comic Book Day now over, we’ve read yesterday’s offering and have out opinion of the term taking over the reins in July.

I mostly dodged the over saturation of the book during the 90s (being monetarily deficient assisted in the endeavour).  I’ve seen the ups and downs of Amazing Spider-man since the Vol 2 launch back in the early 2000s.  And I’ve stuck with Peter without interruption for the last 18 years.  So a major change in the brand gets my spider-sense tingling.

The book takes place before the events of the recent Daredevil events in 600/601.  Partial spoilers: Mayor Fisk is no longer the active mayor of New York.  Stuff happens.  Anyways, Peter Parker and Randy Robertson are going all Groundhog Day on living together.  Believe it, or not: New York is expensive to live in – even with all the superhero damage going on.  However, Peter gets pulled away as a result of Rhino, Electro (um – Electro’s #1 Fan), Boomerang and Big Wheel.  Side note: this appears to be the first appearance of Big Wheel.  So there’s that.  During the battle, Fisk shows up to assist Spidey with the takedown.  Fisk is very not J Jonah Jameson and tells his officers to leave Spidey alone.

More Than Just A Conflict With Villains?

With the re-introduction of Zdarsky’s Peter Parker book – we’ve been spared the mundane moments of Peter’s life in the main book.  Keep ASM full of bad ass fighting and emergencies. Leave Peter Parker to the overly sarcastic and humorous take on the day to day life of the wall crawler.  Unfortunately, Nick Spencer felt the need in this introduction to merge the two worlds again.  If Spencer feels the need to continue down this path, and it truly is early days yet, then we will find readers have a simpler choice between the two books.  Duplication across the available books has rarely worked out well in comics.  There’s only so many eyeballs to capture.  And with the Venom and Deadpool new blood in the water, it’s a bad time to take this risk.

As far as the writing itself, again – it’s early going.  Nick Spencer was involved in the recent Secret Empire event.  It was an ill informed choice to go down that route and it generally did not go down well with fans of the Marvel universe.  We can only hope that Nick learned his lesson about completely spinning a beloved franchise on its ear.  I have no reason to believe that this is the intention with ASM.

However, the script for Spider-man was a little cludgy.  The little things like Spidey’s voice in his head: Peter is a smart-ass.  So he tends to take the shortest route to get the point across.  So too many “it is” instead of “it’s” feels wrong and unnatural. Those little things can make or break whether a story is easy to read (and is character correct).  There’s still time to fix it and as we all know – editors may not have put as much effort into FCBD books that are free compared to the regular business.

On the other hand – the art is a good transition from old to the new.  Ryan Ottley has is a reasonable unknown talent unless you’ve read the Kirkman penned Invincible books.  Ryan did almost all the art for that book (since book 8 if I remember idly).  So this is a big step for him.  And he does it well.  Spider-man has always enjoyed a strong inking style with vibrant colours and shading.  That’s exactly what we get here.

As much as I want to love the direction of ASM, we will have to give it a couple more months to see where it really is going.  In the meantime we’ll give Slott his appropriate due  with ASM 800 and 801.  As a side note: we were asked many times on FCBD what the numbering will look like with ASM #1.  If Avengers #1 was any indicator – there will be a large #1 over a smaller LGCY #802.