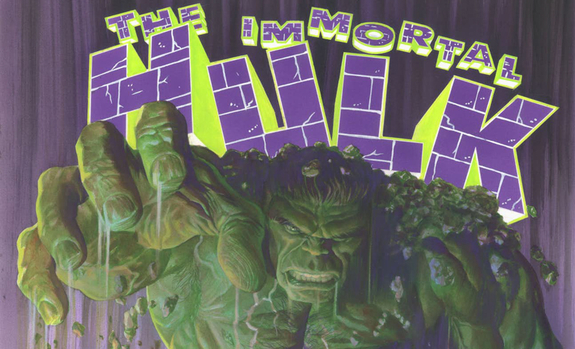 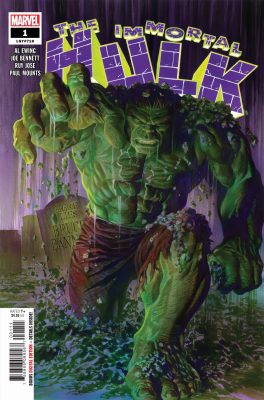 No matter how hard we deny it or try to avoid it, eventually we all die. Except of course if you are the Hulk. No matter what, that angry son of a beep can not and will not stay dead! This undeniable fact is not only unfortunate for those that get in his way, but also for poor Bruce Banner. For once again . . . he must deal with his inner monster.

There Can Be Only One! (If you don’t count the red one or the female one)

The Hulk is back on the loose and not even death can stop him. The Immortal Hulk is a Hulk book that plans to explore the true horror of Banner’s unique condition. He has little to no control over the monster within, and that means the big green guy is free to do as he pleases . . . which includes enacting his own brand of vigilante justice. This intense first issue pulls no smashes. It gives us a very menacing Hulk and I’m not just referring to his creepy glowing green eyes. This Hulk is mean. He makes you feel bad, question your actions, then kicks your ass. All without a single shred of remorse. Plus he does it all with a smile on his face. This isn’t your average “get mad smash stuff” Hulk. He seems more intelligent and has no problem tormenting the target of his anger before the inevitable smashing.

Al Ewing (Avengers: No Surrender) is definitely setting a darker tone for his immortal run, giving us a board-line horror book. He is real focusing on the Jekyll and Hyde roots of the story and showing us just how scary it is when one is unable to control their anger. The Banner he gives us is conflicted, unsure, and unable to maintain the beast within. It feels like Ewing wants to explore the relationship between the Hulk and Banner and the mental drain it has on a puny mortal like Bruce. Will Banner conquer his inner demon or is it truly an unstoppable, unkillable force?

The book’s dark tone is mirrored perfectly with the fantastic art by Joe Bennett (Phoenix Resurrection) and Ruy Jose. The Hulk itself is not fully revealed until the final conflict (someone watched Jaws), after he has successfully smashed a biker gang. And when he is shown his facial expressions hold so much malice and content its a tad unnerving. Pages 20 -23 are the most intense full page Hulk spreads I’ve ever seen! Plus the pacing leading up to them puts you on the edge of your seat making their reveal that more powerful. Also while we are discussing artwork it must be said that the Alex Ross cover is incredible and also helps convey the more mature tone of the story within. 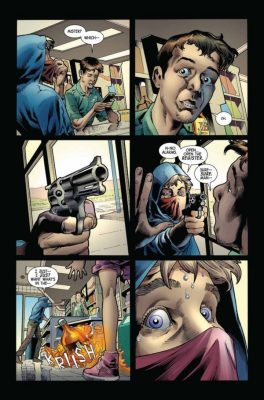 This book is not your average Hulk book. It sets a whole new tone and direction for the purple pants wearing behemoth, one that I think new and old fans can get behind. It boasts a conflict driven story with maturer themes, and fresh directions, while still being true to the core of the character. Hulk gets angry, Bruce gets contemplative, and the need to smash never dies.