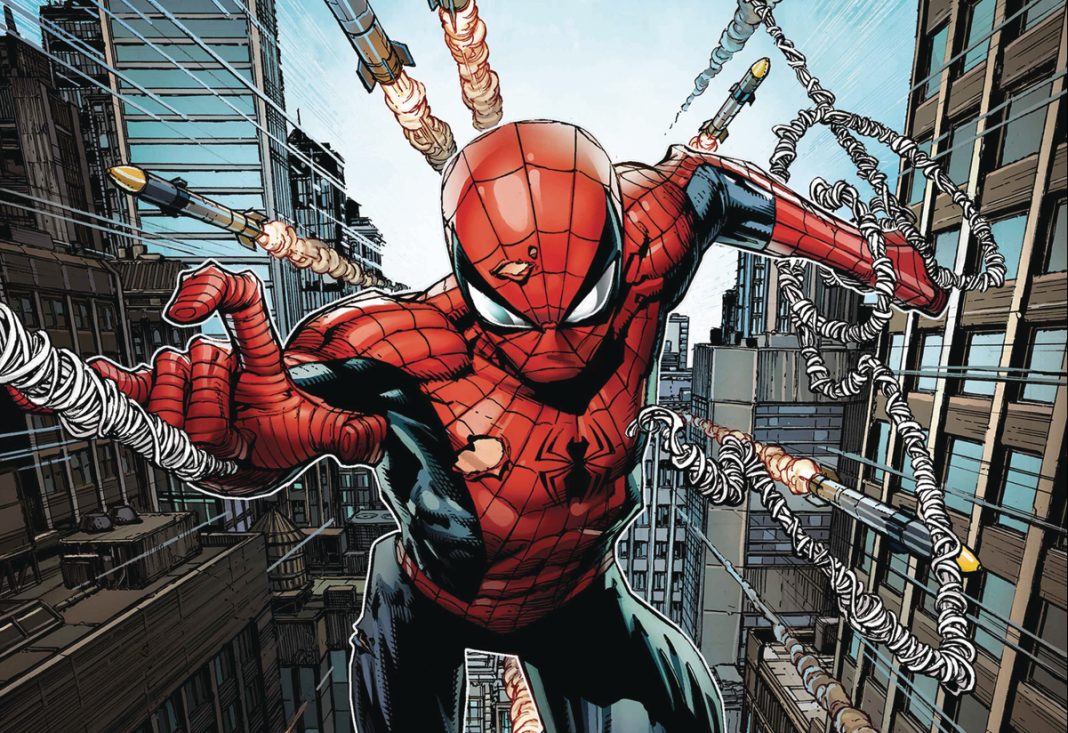 While we’re all in isolation (or, as some of us call it: prime comic reading time), it’s time to ponder the comic releases for June and hope for a speedy end to this virus! In related news – Free Comic Book Day in May is kaput. Was going to be spread out all through May, but a knight in a cave said they had chosen poorly. So it will probably be in the summer.

NON-STOP SPIDER-MAN #1 (Marvel – Unknown Length) – June 3
Get ready for the most action-packed, pulse-pounding, adrenaline-pumping comic OF ALL TIME! As the name implies, once you read page one, panel one, SPIDER-MAN DOES NOT STOP! A mystery at Empire State University thrusts Spider-Man into an adventure that starts in uptown Manhattan and will take him around the world, pitting him against Marvel Universe villains old and new and give you a Spider-Man adventure (and Spider-Man) the likes of which you’ve never seen.
(W) Joe Kelly (A) Chris Bachalo (CA) David Finch

FIRE POWER BY KIRKMAN & SAMNEE #1 (Image Comics – Ongoing) – June 3
The one who wields the fire power is destined to save the world, but Owen Johnson has turned his back on that life. He doesn’t want the power-he never did. He only wants to spend time with his family and live his life, but unseen forces are at work to make that impossible. Danger lurks around every corner as Owen’s past comes back to haunt him.
(W) Robert Kirkman (A/CA) Chris Samnee, Matthew Wilson

STAR WARS RISE OF SKYWALKER ADAPTATION #1 (Marvel – 5 Part Mini-Series) – June 3
REY and the RESISTANCE set out on a desperate quest to stop the threat of the FINAL ORDER! Can they succeed where Jedi Master LUKE SKYWALKER himself failed? And what is KYLO REN’S real goal in partnering with the resurrected PALPATINE? Jody Houser (TIE FIGHTER) and Will Sliney (THE RISE OF KYLO REN) adapt the landmark Skywalker saga, featuring extended and deleted scenes!
(W) Jody Houser (A) Will Sliney (CA) Phil Noto

DCEASED DEAD PLANET #1 (DC – 6-part mini-series) – June 10
After a corrupted Anti-Life Equation turned billions into monsters – including Earth’s Greatest Heroes – our planet was as good as dead. Years later, a distress call brings Damian Wayne, Jon Kent, and Cassie Sandsmark – the Batman, Superman, and Wonder Woman of Earth 2 – back to a dead planet… but what will this new Justice League find waiting for them? If life still exists on Earth, who – or what – is lying in wait for these heroes?
(W/A) Tom Taylor / Trevor Hairsine

JOKER HARLEY CRIMINAL SANITY SECRET FILES #1 (DC – One-Shot) – June 10
Harley Quinn is hunting two serial killers: The Joker, a brutal psychopath who murdered her roommate and disappeared years ago, and the unidentified killer currently terrorizing Gotham City. In this one-shot, see pieces of the puzzle on Harley’s investigation board and steal a glimpse into John Kelly’s high school notebook – a book he still carries today.

LADY BALTIMORE #1 (Dark Horse – 5-part mini-series) – June 10
Once she was Sofia Valk, living in a village overrun by evil. In time she became Lord Baltimore’s most trusted ally. Now, more than a decade after his death, Europe has erupted with the early battles of World War 2 and dark forces are rising again. With witches, vampires, and Nazis on the march, Sofia must embrace the title of Lady Baltimore!  But can she fight monsters without becoming a monster herself?
(W) Mike Mignola, Christopher Golden (A) Bridgit Connell (CA) Abigail Larson

BATMAN THREE JOKERS #1 (DC Black Label – 3-book mini-series) – June 17
Thirty years after Batman: The Killing Joke changed comics forever, Three Jokers reexamines the myth of who, or what, The Joker is and what is at the heart of his eternal battle with Batman.
(W) Geoff Johns (A) Jason Fabok

SNAKE EYES DEADGAME #1 (IDW – Ongoing) – June 17
Snake Eyes has long been the most mysterious member of the Joes, but how long can he keep his past classified when he’s forced to play his hand? Will he get a lucky roll? Or will the deadgame finally catch up to him?
(W) Rob Liefeld, Chad Bowers (A/CA) Rob Liefeld

DARKHOLD ALPHA (Marvel – On-Shot) – June 24
For hundreds of years, scholars and heroes alike have searched for the complete text of the Darkhold – A.K.A. the Book of the Damned, written by the elder god Chthon. Now one of the greatest sorcerers in the Multiverse has found it – and Chthon has found him. To save them all, the Scarlet Witch must gather the world’s greatest heroes… and unleash their inner darkness.
(W) Steve Orlando (A) Cian Tormey (CA) Greg Smallwood