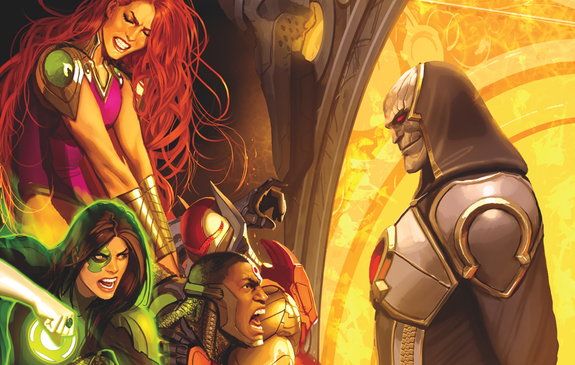 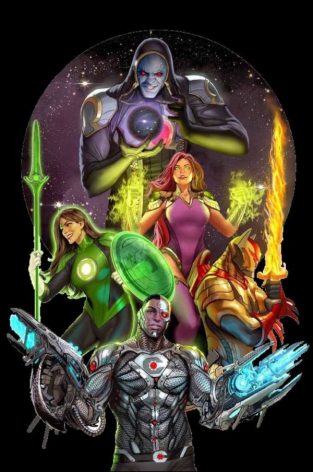 From The Publisher: “Spinning out of JUSTICE LEAGUE: NO JUSTICE! When a cosmic menace threatens worlds beyond our own in the Ghost Sector, it falls to a new Justice League team to answer the call to battle! Cyborg, Starfire, Green Lantern Jessica Cruz and an out-of-his-element Azrael head to deep space inside a commandeered Brainiac Skull Ship. But as these wildcard teammates try to stop Despero from slave-trading Coluan refugees, they discover something that nothing in the universe could have prepared them for Darkseid…who says he’s there to help?!”

With references to No Justice (the story is following up what happened to Colu) and Dark Nights: Metal (broken source wall), this Justice League book is following up in a slightly different direction than other JL books.   The Odyssey crew consists of Cyborg, Starfire, Green Lantern and Azrael.  Some may not remember Azrael – see the Batman: Knightfall books (classic).  This book is not your standard Justice League book.  A nice fresh perspective!

What else is there to like?  Well – this book has some stank!  The is some sass and sarcasm in the interactions between this team.  They aren’t joined together by choice and it shows. There is some growth pending between the characters in their journey to beat Darkseid.  With any luck, there is some originality moving forward.  The story is a bit “on rails” at this point.  Unlikely heroes brought together, a huge emergency and a big baddie at the end.

The art by Sejic is really pretty in this book.  Just beautiful.  As I said, the story is cool.  But the art will bring you back.  The Azrael look is super fresh and new.  It’s nice seeing that old Batsuit come out of retirement.

If you like Justice League, then this is a no-brainer.  If you like books such as Guardians of the Galaxy – this might also tickle your fancy.  Also, as a bonus, you get a preview of the Morrisson-run Green Lantern.  So there’s that.