Kingpin, AKA Wilson Fisk, was first introduced in Amazing Spider-Man way back in 1967 as a thug from the Bronx who was mentored by mob boss Don Rigoletto.  The rumor is that Fisk killed his mentor and took over his empire to become Kingpin, however, such a connection has never been proven in court or anywhere else.  Anyone who goes up against the Kingpin doesn’t usually survive long enough to tell the tale.

These days Kingpin is better known as Daredevil’s main adversary but he’s also made appearances against Captain America, Moon Knight, Doctor Strange and Ghost Rider.  As one of the more prolific villains in the Marvel universe he’s also worked with several popular assassins like Elektra, Bullseye, and Typhoid Mary. 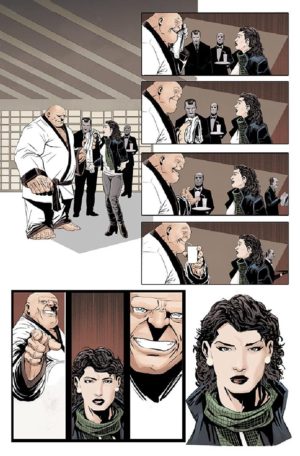 Kingpin #1 is part of the Running With The Devil series (started in Daredevil #17) which also showcases Bullseye (the mini-series started last week) and Elektra (the series starts next week).  The story is centered around Fisk trying to convince journalist Sarah Dewey that he is indeed a reformed person and his past transgressions are indeed in his past. The appearance by district attorney Matt Murdoch (aka Daredevil) injects the cynicism that questions Fisk’s motives and are setup to foreshadow a possible dark path in this series.

The art style of the book is on the simpler side of the spectrum with muted colors and solid inks with little or no shading.  This fairly wordy story moves along at a brisk pace and ends with a satisfying tone that should keep fans of not just the comic book characters but the recent Netflix TV series happy.

If you are late getting on with this series – there are several copies of Bullseye in stock at Alpha Comics.  Even better: add Daredevil, Elektra, Bullseye and Kingpin to your pull list and make sure you don’t miss any of them.