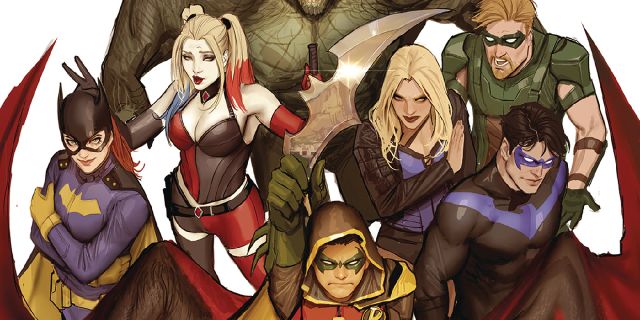 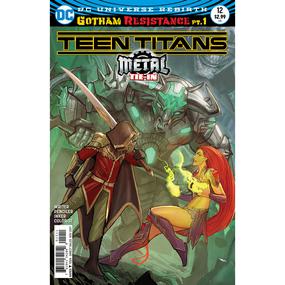 A DARK NIGHTS: METAL tie-in! “GOTHAM RESISTANCE” part one! The shocking events of METAL have transformed Gotham City into a mosaic of fantastical realms full of monsters, magic and DOOM! An SOS from Dick Grayson sends Robin back to Gotham to find a number of hometown heroes (and anti-heroes) including Batgirl, Harley Quinn, Killer Croc, Black Canary and a certain Emerald Archer all trapped in a Riddler-esque labyrinth of madness and death!

Note: As with most Tie-ins to events – this book requires reading Dark Nights Metal 1 and 2 before reading this book for the best experience…

The Teen Titans are an organization of young vigilantes banded together to fight crime. Beginning as a group of side-kicks looking to distinguish themselves from their mentors, they would go on to expand into a world-wide establishment.  The current iteration of Titans includes Damian Wayne, Starfire, Raven, Beast Boy and the new Kid Flash and the current book comes off the initial Ra’s Al Ghul storyline.

The offshoot of the Metal stories has the team fighting the stuff hitting the fan while Robin is distracted by a SOS from inside the wall (the mountain).  Robin goes behind the wall while the team holds off the hordes.  While there he runs into some well known DC characters and works towards the source of the SOS.