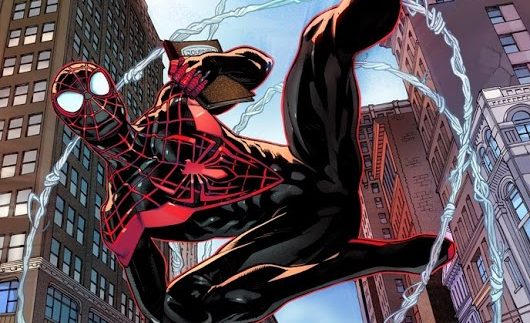 Balancing his normal life, school, parents, etc…and super- has never been easy, but when the Rhino and a cadre of mysterious criminals start plaguing Brooklyn, things take a dark turn. And Miles doesn’t even know the half of it yet. Eisner Award-winner Saladin Ahmed (BLACK BOLT) and Young Gun Javier Garrón (ANT-MAN & THE WASP) bring you the latest incarnation of the coolest character in the Marvel Universe!

Miles Morales was originally created as a replacement for the deceased Peter Parker in Ultimate Fallout #4 in 2011.  However, as we all know, dead is not dead in our beloved comic universe.   Peter came back and the Miles Morales’ Spider-man floundered as a lesser character in the Ultimate Marvel universe.  As of late, he’s found his way in his own Spider-man book.

In yet another relaunch of the character, with a new creative team, Miles’ Spider-man is very much the everyman for the current age.  Unlike Peter Parker, Miles is very much a normal high schooler outside of his super persona.  His parents know about his extra-curricular activities and worry about him.  He’s trying to balance a clumsy love life.  He’s working to complete high school without failing due to tardy slips.

In addition to the personal stuff, Mile’s exists in a politically current world.  His parents worry about detained immigrants.  It’s a very smart way to create a character and storyline that is relatable.   Unfortunately, it’s not particularly good for all ages.  By that, I mean that the older you are, the more likely you won’t relate.  Marvel now has a completely 2-sided coin here – complete coverage for all ages of Spider-man fans.  And with Miles as a main character in the upcoming Spider-verse movie, this comes at the ideal time for fans to jump on board.