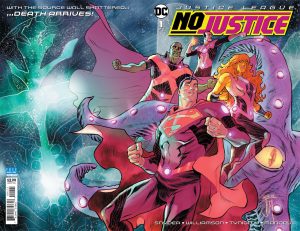 Thanks to the earth shattering/totally rad events of Dark Knights Metal, the source wall has been cracked open, the Omega Titans have been awoken, and the entire DCU is in grave danger! Nothing the Justice League can’t handle, right? That’s not what Brainiac seems to think. Now the heroes of earth find themselves fighting side by side with new allies and old enemies, but will they have what it takes to save the world? Or is there really no justice…

Just Us Against The World

No Justice promises to be a powerhouse event and so far it’s holding up to that boast. With the combined writing talents of Scott Snyder (Wytches), James Tynion IV (The Woods), and Joshua Williamson (Masks and Mobsters), how could you expect anything less? Together these guys bring us a well crafted, carefully planned tale weaved throughout with twists, intrigue and glorious action. It’s hard to say where this story will take us, but it’s outcome will definitely have a huge impact on the future of the DCU.

The art in this book is phenomenal! Francis Manapul (Trinity), gives us stunning visuals and

epic fight scenes. He is given lots of chance to express himself with full page layouts and split panels, and he doesn’t disappoint. Plus the colouring they use really adds to his style and gives a almost psychedelic look. I have so many favourite pages, I don’t even know which one to single out. Probably 9 and 10 if I have to choose. Though 18 and 19 are a close second. There are many times while reading this book that I just found myself lingering on a page just to soak in the visuals.

Starro Of The Show

The new teams that you’ll see in this book are a crazy mix of heroes, villains, and mischievous misfits, but allow me to single one out. The truly bizarre, extremely entertaining, and borderline lame, master of mind control Starro! One thing I’ve loved about the recent DC events (a.k.a Metal)  is how they are integrating obscure and lesser 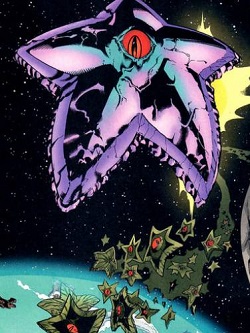 known characters back into the mainstream. I know Starro has occasionally appeared from time to time since his first appearance in Brave and the Bold #28. However, I still want to shake the hand of whomever decided to throw him on a JL team. I think it’s a hilarious idea and will lead to some entertaining interactions.

One For All, All For Justice

If you’ve read Metal, then you have no choice but to read No Justice. The ending of that stellar joy ride leads directly to this epic 4 part story. Things are going to change for the Justice League and the outcome of this story is going to have a large effect of the DCU’s future. It’s very exciting to see what’ll happen, I sure this talented team of writers will give us a lot to talk about. If not, the fantastic artwork is more than worth the cover price. Until next time . . . All Hail Starro!