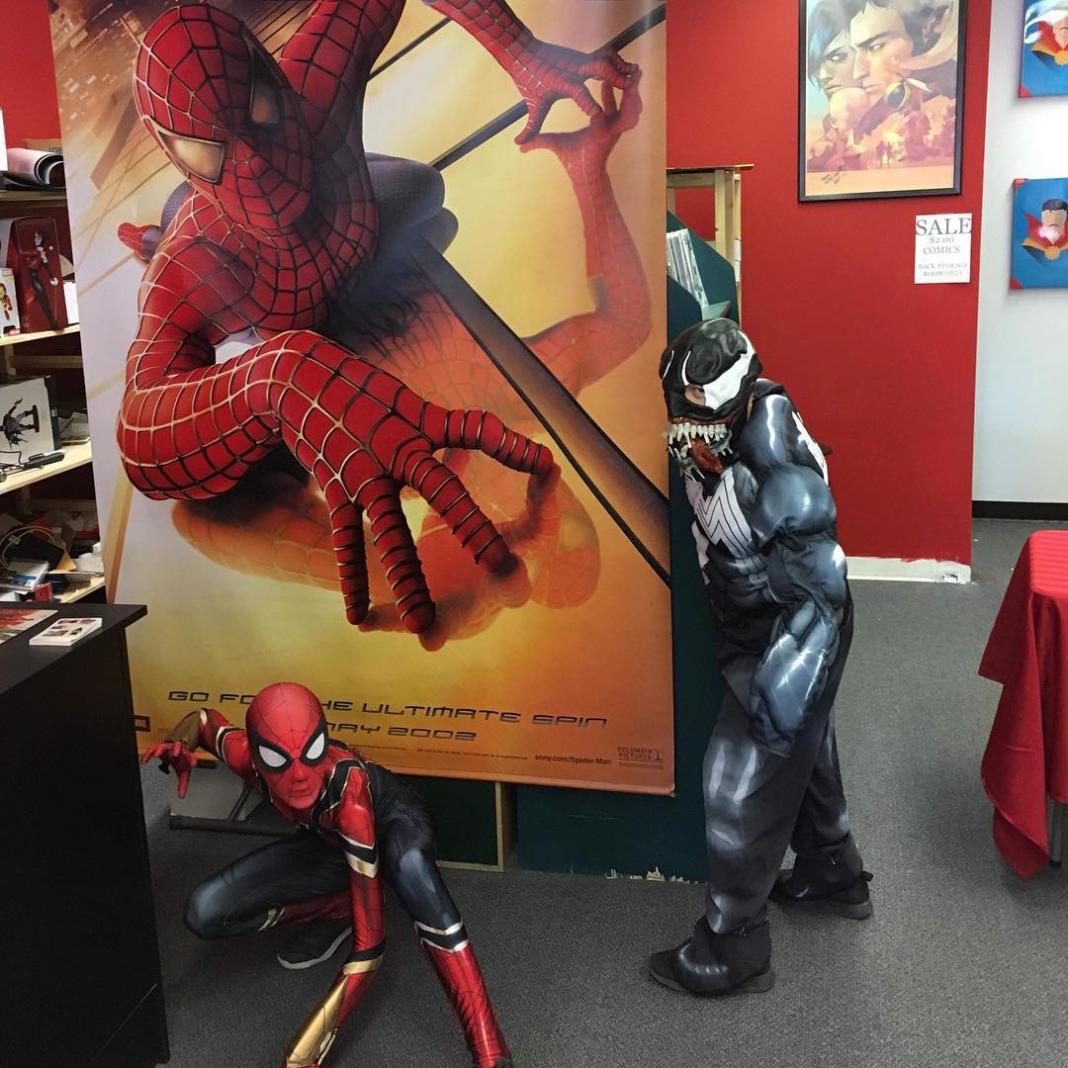 Alpha just completed a whirlwind month.  October brought some guests into the store as well as some great comic events.  With the month passing by so fast, we figured there was no better time to reflect on the month. As well, we should thank some people for their involvement! 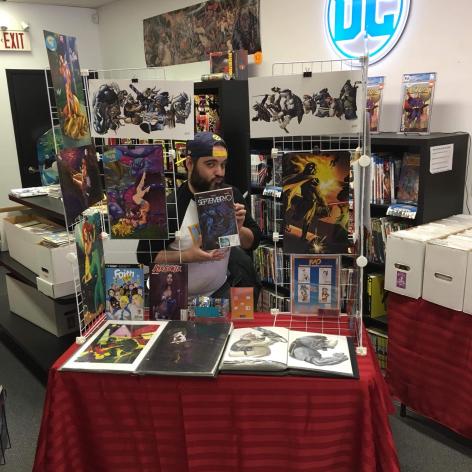 A little bit of pre-October fun – on the 29th of September, Roberto Duque (www.radpencils.com) came by the store to see Alpha customers.  Roberto has worked with Marvel/Upper Deck, Valiant (Faith) and his own ongoing series Septembryo.  Roberto signed some books and drew some sketches including a Teenage Mutant Ninja Turtle or two.  Thanks to Roberto for visiting us!

The month kicked off with the Alpha team as well

as some customers going to see the premiere of the Venom movie.  Everyone really seemed to like the movie (and the subsequent preview of the new Spider-man animated movie).  Everyone else wasn’t left out of the festivities with Venom swag given away at the store.  Congratulations to those who won tickets through the social media channels. As well, a special thanks to Megan for covering the store on a busy New Comic Book Day while everyone was at the theater!

Our first signing of October was by the Futility team of Rick Overwater (www.overwater.ca) and Cam Hayden (Twitter) on the 6th.  The guys were at Alpha to promote Futility #5. It’s a new oversized book continuing the adventures of Red Hayes, the 40-something-year-old in space.   There were quite a few of the new book sold in addition to the previous four.   Thanks again to Rick and Cam for spending the day with the Alpha team!  Side note – if you haven’t picked them up yet – Cam’s collector cards Oddballs Of Country Music are still available at Alpha! 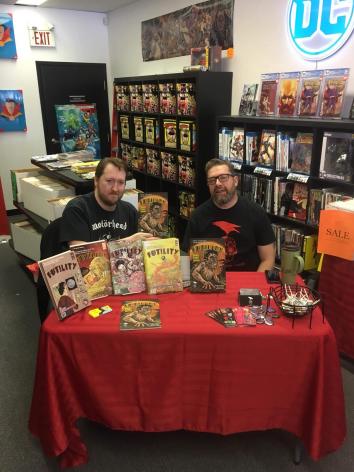 Good Value In A Two-For-One 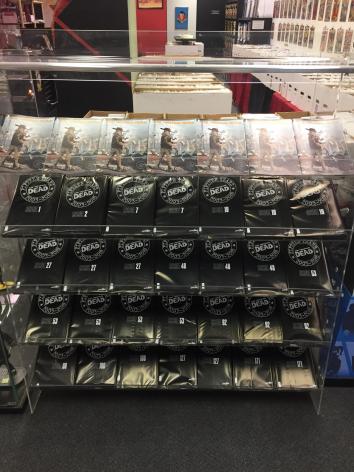 On October 13th we got a two-for-one.  It was Walking Dead Day with special 15th-anniversary black bagged reprint comics.  Many Alpha customers walked away with new variant covers for key issues including black and white and virgin covers.  A few lucky folks even got the elusive 1:100 pencil sketch covers.  There was plenty of swag for this event as well with buttons, masks and free comics available for all.

The other side of the two-for-one were the guys behind The Heroic Age of Galactic Exploration with Jack Shackleton.  Ian Nicholas (from Panel One) and Nathan Millar (www.nathanmillar.ca) entertained everyone with a day of frivolity and humor in addition to signing some books.  If you didn’t get enough of Ian’s art when they were at Alpha, you can stop by Zero Issue Brewery to see his Venom go wild on their new brew.  Thanks again to Ian and Nate for brightening up the store! 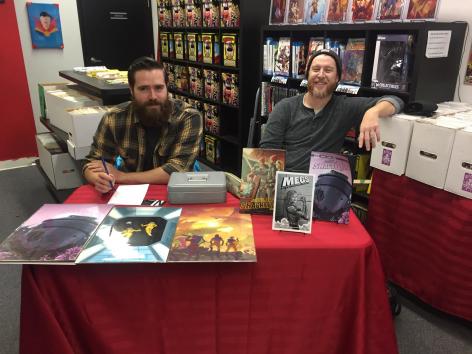 Getting toward the tail end of the month, on October 20th Alpha saw the appearance of Chad Colpitts (Tongue In Cheek Comics).  The creator of The Streaker and B-Movie Garbage made a special appearance behind the signing table to sell some books including his special edition The Streaker Noir.  Chad was at the store all day educating everyone who stopped by on some seriously “bad” movies and some great comics.  Thanks again to Chad for coming by, now get behind the counter – your break is over! 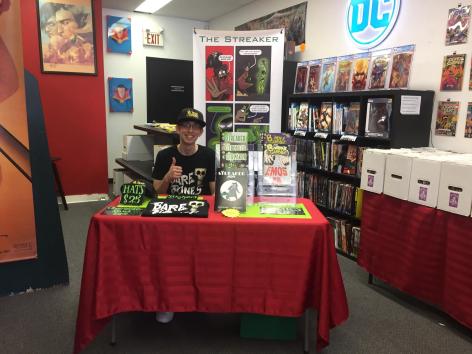 Can’t Get Enough Of A Good Thing

To round out the month before we all go insane for Halloween, Alpha had yet another twofer on October 27th. First of all, it was Halloween Comic Fest.  Comic fans of all ages were invited to comic books stores. Great free books like Superior Spider-man or Ms. Marvel were available.  There were quite a few customers of all ages that came in dressed up in their favorite characters. 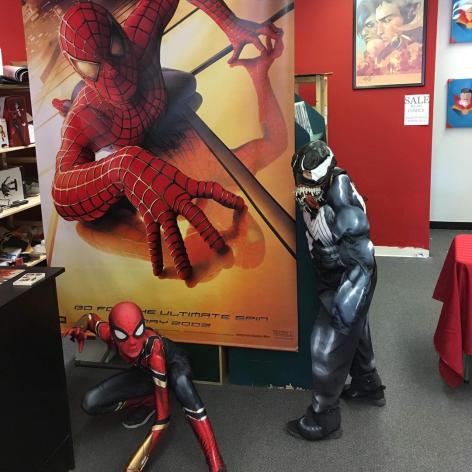 However, to cap off this month of goodness: Alpha welcomed the always awesome Riley Rossmo (rileyrossmo.com).  Riley is a veteran of the comic book industry with such great books as Constantine and Death Bed as well as some well known DC books like Batman Who Laughs.  Additionally, there was a CGC witness at the store (thanks Dan). Our customers could submit Riley’s autographs to CGC for grading with that beautiful yellow label.  Riley spent the day at Alpha signing more than one Batman. In addition, he was showing everyone his mad skills as a head sketch master!  Thanks again, Riley! 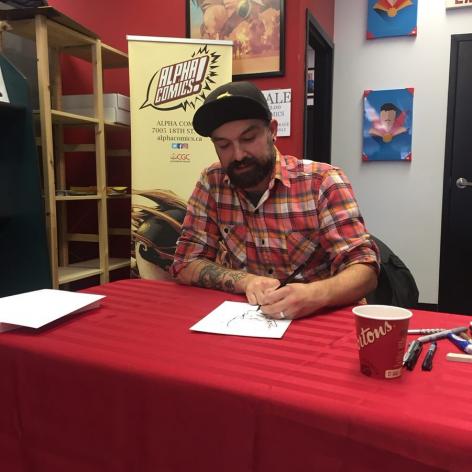 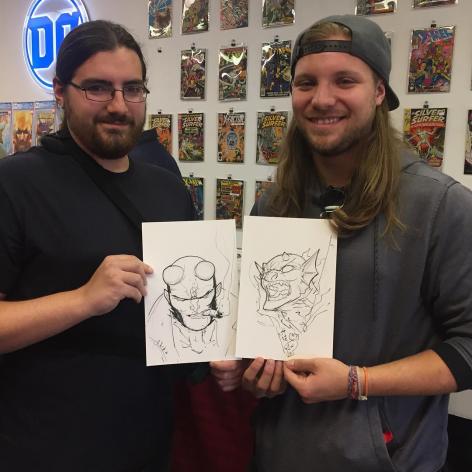 It was nice to see everyone to come out to the events this month.  There was a lot of the same people at Alpha every weekend. However, there were also some fresh new faces supporting local writers and artists.  It’s been a great month – now Alpha looks forward to the holiday season!