The Phoenix Generations – Written by Cullen Bunn and illustrated by R.B. Silva

If you see me in a comic book store and happen to listen to the words coming out of my mouth, there is a good chance I’ll be talkin’ bout them generations. 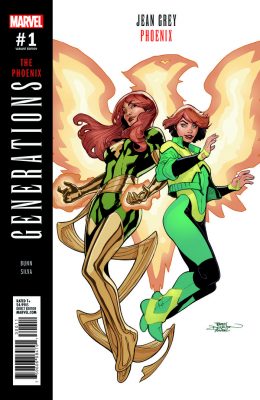 Which should be completely understandable, because so far they have been extraordinarily entertaining. It’s almost a little astonishing and slightly uncanny. First off we were given a smashing good time, and now we get an insightful space romp with everyone’s favourite fire chicken (I’m lovingly referring the Phoenix of course).

Now I’m not here to tell you your vision is perfect, because it’s probably not. If it was you’d most likely be playing shirtless volleyball and hanging out with Goose. However, I can assure you that when you read this book you actually are seeing two Jean Greys. The first one being the younger time displaced mutant from the current ongoing, and the second being the one bonded with the uber powerful cosmic force called the Phoenix. Don’t worry you’re not losing control of your brain (yet). This exciting ten-issue anthology series is bringing us awesome team ups between classic Marvel characters and their current counterparts. This book is the second in this series of one-shots, and as far as I’m concerned a second hit.

Written by Cullen Bunn (Deadpool Kills) and illustrated by R.B. Silva (Monsters Unleashed), the Phoenix Generations is basically a team up between Jean Grey and Jean Grey a.k.a the Phoenix. Without any real explanation, the current Jean Grey is transported back in time to a when where her older self (time travel is confusing) is mourning the X-Men and embracing the power of the cosmic entity known as the Phoenix Force. Jean is scared of her possible future and has lots to ask her older past self, and luckily for her (and us) the Phoenix is happy to show her what’s what. 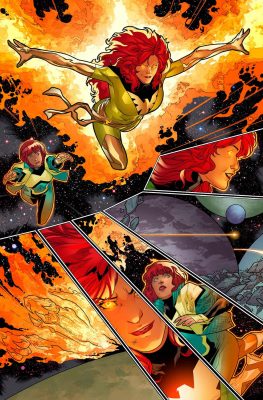 Bunn gives us an entertaining story with insight into both characters as well as some intergalactic fun. This story is important for the growth of the current Jean. It gives her a glimpse of what she could become, and makes her test her integrity. The most intriguing part of this character is her internal struggle, and it’s hard not to get invested in her and desperately hope for a happy outcome.

The art soars off the page, especially when things get cosmic. Silva gives us neat looking space creatures, and bizarre landscapes. Plus he shows that he can do a stellar portrayal of the great old purple planet eater (you know the guy).

Why should you pick up this book? Because it’s a satisfying read, that’s why. It’s as simple as that. It’s great for X-Men fans, and Phoenix fans, and even Jean Grey fans, but also for new fans. If you were ever interested in this character, but never quite followed up on your interest here’s your chance. This book gives you some backstory on the character, and gives you a stand alone adventure. If you don’t like it you can hurl it up into the cosmos, or if you do like it you can hop into the Jean Grey ongoing. Which is convenient for you, because issue 5 should be on the new release rack you just pulled this one off of. If you like this issue of Generations, make sure to check out the rest along with the first one which came out last Wednesday. It’s the Hulk one. 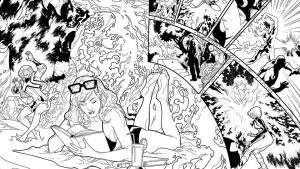 P.S. If you’re thinking to yourself, where the heck am I going to store 10 whole issues of this series? Alpha has answered your question. Grab one of the slick looking Generations boxes, it’ll hold all 10 and even more! Hooray!