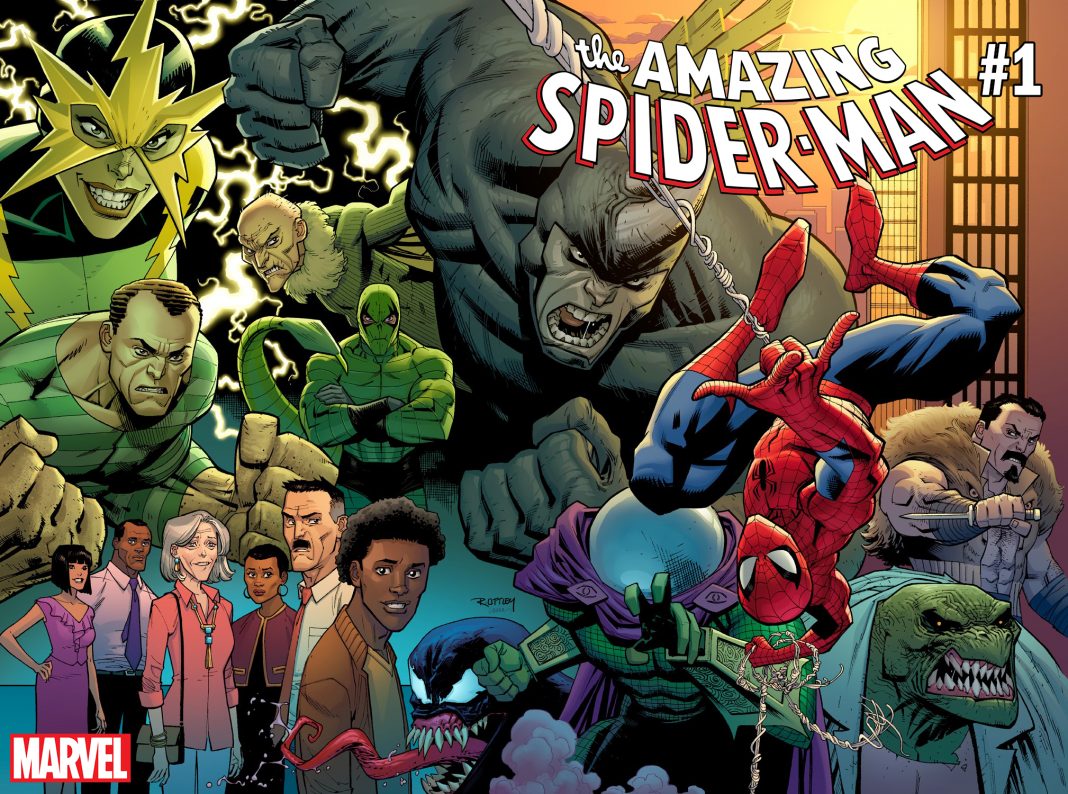 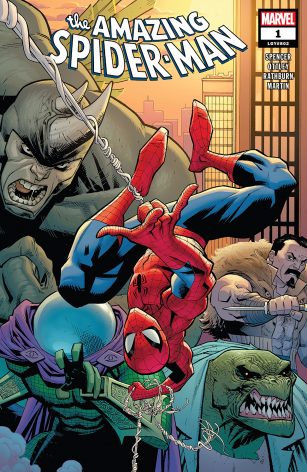 From Marvel: An alien invasion hits New York City and the only one who can stop it is…Spider-Man?! And if even that’s not enough, you’ll see a new roommate, new love interests – and a new villain! Spider-Man goes back to basics courtesy of Nick Spencer (SECRET EMPIRE, SUPERIOR FOES OF SPIDER-MAN) and the Marvel debut of RYAN OTTLEY (Invincible)!

Way back in May a book came out on Free Comic Book Day introducing the new talent on Amazing Spider-man FBCD. I spent a great deal of time pouring over that book.  It was the first taste of the direction that we would be getting from Nick Spencer and Ryan Ottley.  My concerns were clearly noted.  Getting my hands on the official commencement of Nick and Ryan’s tenure and seeing it was named Back To Basics did not bode well.

The book starts off much like the FCBD version ended – Peter has a new apartment, a new-ish villain called Boomerang is now his roommate and is enjoying his new time at the Bugle.  It’s like the new guy felt that he wanted to completely have his own story.   No encumbrances from the previous Dan Slott stories were wanted.  No more job at the Bugle.  MJ is back in the picture.  Bring back Doc Connors and Mysterio. And everything that Doc Ock did while Superior Spider-man, well, Peter got in heck for that as well.  Also – there’s a new villain.  I can’t tell you much about said villain because nothing is really said.

Some of my concerns have subsided from the preview.  But I still have an issue with the book moving too close to the Spectacular Peter Parker stories.  There has to be a solid line between the tones of the two.  Maybe the new direction in the story requires a temporary closeness between the books?  We will have to give it some time.

On the other hand – the art is spectacular (no pun intended).  Cover A’s wrap-around cover is one of the best in recent memory.  It’s absolutely gorgeous and keeps pretty good continuity with the last 100 or so books.  I kept looking at the page rather than reading the words as a result of the great art.  It’s a great problem to have.

Don’t pass up this book.  It’s a long introduction to Nick Spencer’s vision to be sure.  It’s also not clear where he’s going yet.  The Spidey fans have had concerns before.  And will have concerns again.  Spidey fans have a high bar to reach – let’s give him time to get there.