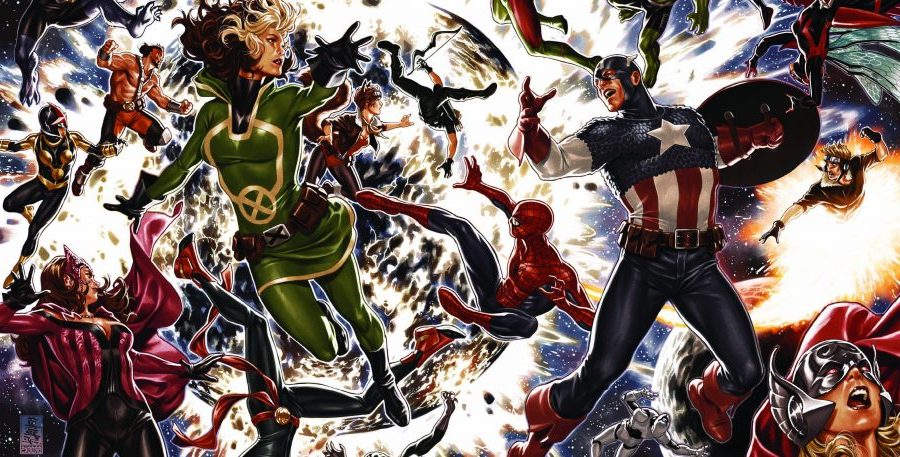 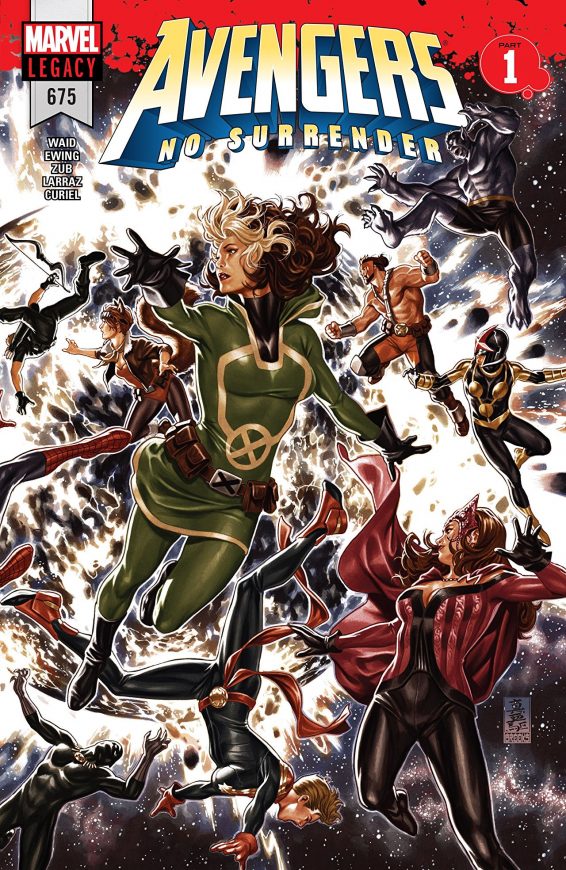 From Marvel: “AVENGERS goes WEEKLY for the stunning sixteen-part saga that will write the end of an era! The Earth has been STOLEN! The sky burns while mysterious cosmic objects crash down from above, wreaking havoc across the world! The Avengers are the last line of defense between Earth and the mysterious forces threatening to tear it apart. It’s time to ASSEMBLE! The teams you know and love from AVENGERS, UNCANNY AVENGERS, U.S.AVENGERS and OCCUPY AVENGERS come together to face a threat beyond any they’ve faced before in a weekly epic adventure that will define the future of Earth’s Mightiest Heroes!”

We haven’t had this many characters in a book since the Avengers vs X-Men (AvX) series a few years ago.  Any book that requires a map at the end of the book to help reference the characters has a lot to follow.  The great part is that unlike AvX this book doesn’t feel overwhelming.  The characters are introduced gradually in a more “realistic” fashion – they are assembled from all around the world.  I could go through the list, but while the standard Avengers are here, there are also members from the other Avengers books recently introduced.   So there’s something for everyone here.

There’s no real way to spoil this book. it’s all been said in the Marvel summary above.  Bad things are happening.  Press the shiny red button!  Superhero convention!  The only real surprise is the mystery figure at the end of the book.  My best guess is that it’s Voyager since Marvel has been dangling this particular carrot for months now.  Voyager (Valerie Vector) was supposedly one of the founding members.  And now she’s an important character moving forward and the tentpole of this particular storyline.   For those who read the Marvel Legacy #1 – there are some interesting clues in that book as well.

Now to the real star of this book: the lenticular Mark Brooks cover.  Wow! This is a beautiful cover and for the first time I can remember uses the lenticular style to create a truly 3D look.  The wrap-around cover will be talked about for years to come (and I’m sure we’ll see more than a few posters of it).  The art by Pepe Larraz pairs well with the cover and tells the story well.

By and large this is a great place to jump into the Avengers series if you aren’t already on board.  And for those who are already fans: get ready for a wild ride!