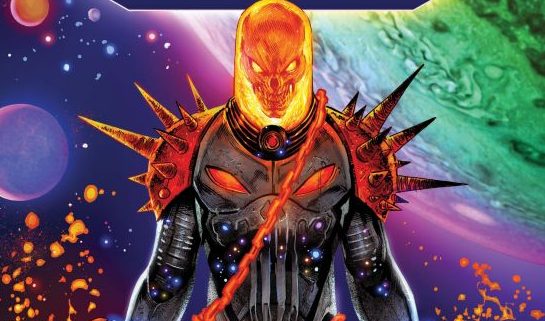 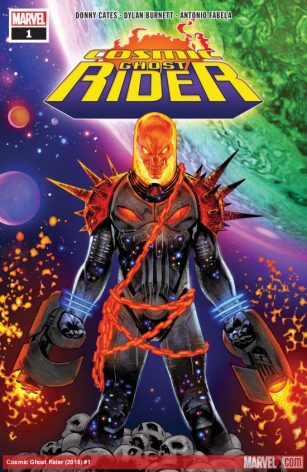 From the Publisher: “Frank Castle was the Punisher. A deal with the devil made him Ghost Rider. A deal with Galactus made him cosmic. A deal with Thanos made him…DEAD?!? Not to worry, he’s coming back, and he’s got a plan to make the universe a better place that’s going to lead him into an even CRAZIER adventure than he’s ever been in! Join hot new comic (and cosmic?) writer Donny Cates (THANOS, DOCTOR STRANGE) as he pushes his wildest creation past the breaking point!”

Ghost Rider has seen MANY iterations.  The first version was Johnny Blaze until the mid 80s.  Then the torch was passed to Danny Ketch until the 2000s.  For a short time, Alejandra Jones was Ghost Rider.  And then a few years ago Robbie Reyes took on the flaming mantle.  Marvel has gone back to an old character to take on the cosmic variation in Frank Castle – The Punisher (see Thanos #13 for the back story on this one).

This variation of the motorcycle riding demon was really pushed into this book from the recent Thanos: Annual.  Odin comes in and escorts him through a portal to Valhalla.  And here we are.

How To Transition From The Mad Titan The Right Way

There’s not a lot going on in this book as a result of the rather abrupt entrance to Valhalla. Odin is a cranky old man.  And Castle hate everything.  They make a good pair.  Too bad they are almost immediately separated so Ghost Rider can be all cosmic.  Donny writes the heck out of this book and continues the storyline created in his Thanos run.  If you were on board with that book – this one should be your bag.

The art is frantic and expressive.  It also feels a little old school resulting in lots of basic colours that feel right.  There’s not much that I can poo-poo when it comes to the art.  The only thing that bugged me was not a problem with the art or the writing at all.  The middle ad for Fantastic Four is huge.  Marvel: stop making these large foldouts.  Just use normal pages.  Seriously.  Stop compensating!

Marvel’s insecurities aside, this book is a keeper. Every Cates/Thanos fan should have this on their pull list.  Run, don’t walk, and get it.