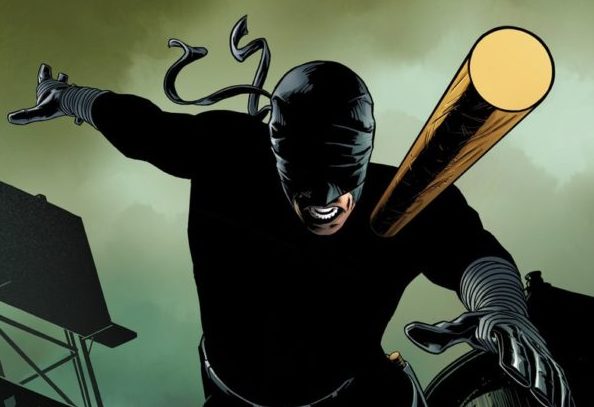 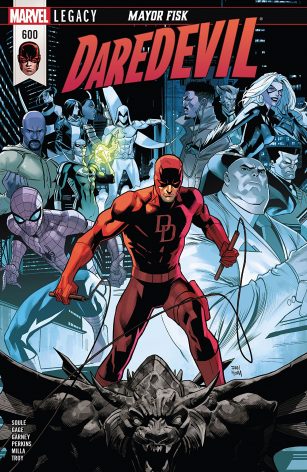 AN OVERSIZED ANNIVERSARY ISSUE, BRINGING YOU THE CLIMAX OF “MAYOR FISK”! Daredevil can see the new mayor’s machinations coming together…but is he in time to stop them? Guest-starring both the heroes and villains of the New York City streets…this huge issue has a surprise ending that will shake the city to its very core! Plus: a look at Foggy & Matt’s relationship over the years!

What I’ve always liked about these “OVERSIZED, DIVISIBLE BY 100” books is that there are no rules.  Recently Peter Parker 300 did a great job of putting the Spidey’s story on its ear.  We have upcoming books Action 1000 and Amazing Spider-man 800 that also make this bold claim.  However, doing this without completely and abruptly throwing the concept behind the book off the rails is tough.  That shock factor tends to be more of an emotional shock rather than genuine surprise.  As a result, readers tend to be left confused rather than comfortable with the new direction.

Daredevil 600 is one of those “rule-breaking” books.  The list of supporting cast is long and includes: The Defenders (rather than naming them all), Spider-man, Misty Knight, Moon Knight, Echo, Blindspot and Muse.  The main storyline has Daredevil working with the team to figure out what they can do about Fisk as mayor of NYC.  A secondary storyline flashes over to Blindspot and Muse sparring across rooftops in downtown New York.  Both sides of the story are SO different.  However, they really don’t interrupt each other in any discernible way.

The big deal with this book is the surprise ending.  It’s one of those genuine surprise situations.  It’s been built up gradually over the course of the book (and before this book) and feels very comfortable.  As a result, when you get to that point its a slap the ole forehead moment.  It makes sense.

The main story is written by Charles Soule with art by Ron Garney.  There is a second “short” story included with this book called “They Also Serve.”  It’s a flashback story about Matt Murdock and Foggy Nelson’s early days.  Written by Christos Gage with art by Mike Perkins.  In both cases, the art propels the story forward well even if they are very different styles.  My one nitpick is there are moments in the main part of the book where the art feels really rushed and loose – it doesn’t match the rest of the art.  That’s minor though.

If you’re jumping into Daredevil – there’s enough of a right turn in this to make it a good time.  And it’s GIANT SIZED.  SUPER SIZED.  It’s big.  And the extra pages aren’t wasted or filler.  So far these tentpole “DIVISIBLE BY 100” books haven’t missed the target since Marvel Legacy launched.  Come on Marvel – let’s see the streak alive!