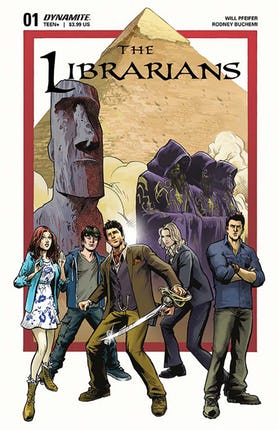 Written by: Will Pfeiffer
Art by: Rodney Buchemi
Publisher: Dynamite

The Librarians is based on the Canadian-Produced TNT show of the same name.  Starring Noah Wylie and John Larroquette, the show has been on for a few seasons now and basically follows a Scooby-doo-esque crew of Librarians that spend time trying to rescue magic relics from bad situations.  For those who knew another Canadian produced series called The Warehouse – it’s roughly the same thing just with more people in the cast.  I’ve seen all the episodes of seasons 1 through 3.  The show has been goofy and fun but lacked the spit and polish we see in larger productions.  But it does have an almost cult-like following which is why its expected to air its 4th season late this year.

Now back to the book…  when Flynn goes to see his childhood hero speak, he gets more than he bargained for then the man is murdered on stage in front of him.  But Flynn only sees the mystery of the murder weapon and its time for the librarians to figure this out!

The book reads much like an episode of the TV show – heavy on dialogue filled with historical details.  To this end it will take some time to get through the book.  Will Pfeiffer, who has written for a few publishers and a lot of books (including Catwoman and Batman) seems to know the subject matter and show well.  And the art style works well for this Tv adaptation.  You will enjoy the book regardless of your affinity to the TV show if you like Tomb Raider, or other historical mystery tours.

One niggle with Dynamite books of late (and I ready more than the average comic buyer) – why does one-third of the book have to be ads and non-content pages?  Its just such a waste…