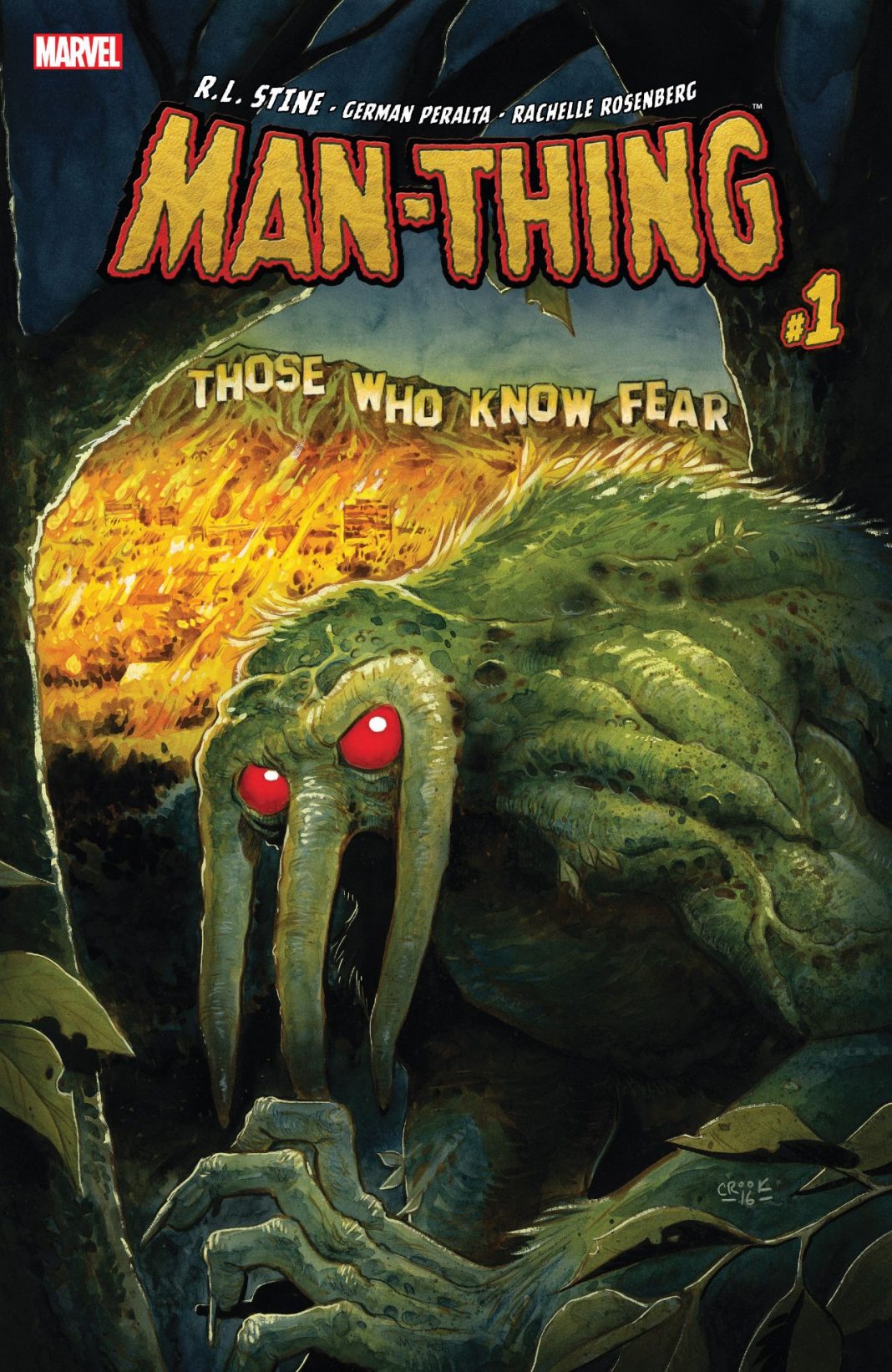 Written by R.L. Stine and drawn by German Peralta and Rachelle Rosenberg

First things first. Man-Thing is named for the simple fact that he is half man and half thing. It is a very logical name that not only makes perfect sense, but is equally descriptive. It is no fault to the creators that this term eventually became slang to describe the appendage that Bruce Jenner got rid of. So do me a favour, and before reading anymore of this review get it all out of your system. Grab onto your slimy minds and yank them out of the gutter.

Man-Thing is actually a very interesting and wicked cool character, who is under used and under appreciated (which is also what I tell my girlfriend about my M . . . . Never mind). Seriously though. Man-Thing is a empathic creature tied to the mystical forces of the swamp where he was created. He is drawn into situations by emotions like anger and fear which assault his mind, leaving him no choice but to the destroy it’s source and rid his pain. I know, right?! Fantastic stuff, conjured by the brilliant mind of Steve Gerber. I know what your thinking, and allowed me to slap this thought from your head. Man-Thing is NOT a Swamp Thing rip off. Man-Thing first appeared in Savage Tales #1 May 1971, where as Swamp Thing first appeared in House of Secrets #92 July 1971. So there.

This return of the mindless, shambling, mockery of a man is written by the one and only R.L. Stine (this very name should give you Goosebumps) and drawn by the equally talented team of German Peralta (Agents of S.H.I.E.L.D) and Rachelle Rosenberg (Web Warriors). This tale starts of with a talking/ identity aware Man-Thing trying fit into the human world (Almost like this character was confused with the other Gerber creation Howard the Duck). Things aren’t working out in his favour and things get worse when a creature tied to his past appears. R.L. Stine’s books are legendary, filling both personal and public libraries all over the world. However, I have a hunch his personal library does not contain and collection of Man-Thing comics. I will admit right now I was a little disappointed with this comic, but Zack Snyder has taught me how to deal with disappointment so I’m over it. When I first heard that Man-Thing was being placed in the hands of Stine, I was thrilled. I probably jumped up, cheered, and was shaking like a polaroid picture. So don’t get me wrong, I’m still happy he is doing this book. I think it’s a great interpretation, it’s just not 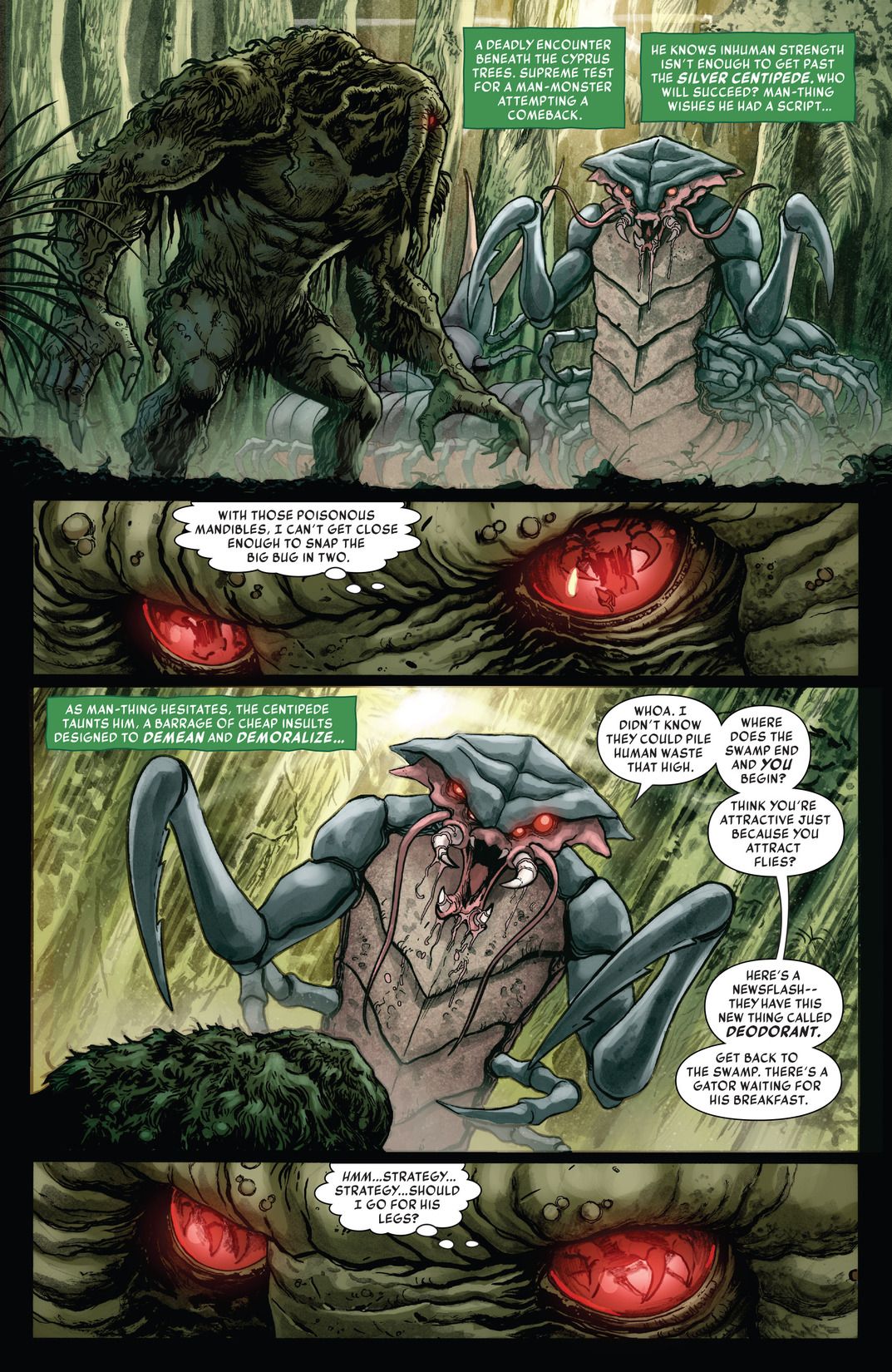 what I’m use to from a Man-Thing book. Man-Thing stories are usually thought provoking, and inspiringly bizarre yet still very real. This story is very campy, and more of a love letter to EC comics than Man-Thing comics. Which is not a bad thing at all. I love campy tales and I loved the moral inducing madness of EC comics. If this was a different character title I’d be jumping over the moon, and praising the crap out of this book. The writing is funny, and the story moves smoothly. There is also a chance this story will lead into a more Man-Thing type direction, (hopefully it’ll take us straight into the Nexus of all Realities) but who knows. The artwork is perfect! It has a certain style that fits this character and it’s setting. The centipede monster we see our hero tangle with at the beginning is beyond cool looking. It’s creepy, and crawly and probably reminiscent of creatures you’d find under a Motel sink. It also has a near perfect drool amount. I have no doubt this series will produce some bizarre creatures and landscapes which will be masterfully display by this artistic team.

Overall, this book is definitely worth the pick up. Even if it wasn’t the adventure into fear I was hoping for, it’s still a fun, entertaining book which moves at a fast engaging pace. If you are a fan of R.L Stine, you have added reasons to read this book. It’s laced with his usual humour and creepy charm. Plus, there is a bonus (completely non-man-thing related) story at the end which is very Tales From The Crypt and a fun read. If you know nothing about Man-Thing that’s ok, this book is definitely designed for new readers. It even has a convenient origin recap. If you enjoy this comic do yourself a solid and picked up one of the Man-Thing collections sitting on the back book shelf in Alpha. It’s filled with some fantastic stories. If your issue hunting, keep an eye out for my favourite issue #12 “Song-Cry . . . . of the Living Dead Man!” It’s a truly unique comic, that shouldn’t be missed. That’s that, until next time. Just remember have no fear, because those who know fear burn at the Man-Things touch! Please don’t ruin this moment with an STI joke. Just don’t do it.