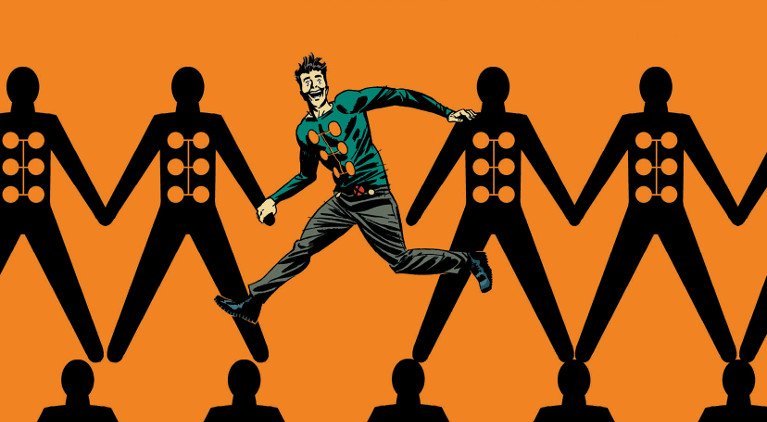 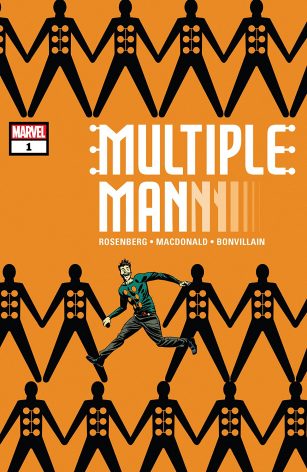 From the Publisher: “MATTHEW ROSENBERG & ANDY MACDONALD BRING MULTIPLE MAN BACK FROM THE DEAD…SORT OF…MAYBE? A handful of people’s favorite X-Man – Jamie Madrox – was alive for a while. Then he was dead. Now he’s not. But he will be again if he doesn’t kill himself trying to make sure he doesn’t die. It makes sense when you read it. Trust us. In his fight to not die, Jamie has stumbled across a threat even greater than his own death, but fixing it might make it worse. Can he save the world from himself? On top of all that, the X-Men are mad at him now, and a mysterious new group of foes is after him, too. We can’t tell you who they are, but they’re pretty great.”

Jamie Madrox, known as multiple man, was created by Chris Claremont way back in 1975.  Madrox made his appearance in Giant Size Fantastic Four #4.  A mutant with the ability to create duplicates of himself, he was a very minor character until 1987.  Thats when Fallen Angels, a miniseries, was published.  Madrox also played in pretty good role in X-Factor and Mutant Town.  Recently, Multiple Man has had his screen time as well with a small role in X-Men: Last Stand.

I would imagine the characters limited visibility is why Marvel only green lit five issues for this series.  I had to do some research on the character because had literally never hear of him before.  As a result I was able to go into this book with no preconceived notions.

However – that may have actually worked against me.  The story concept is compelling – the X-men find one of Jamie’s duplicates almost dying.  After Beast gets him back on his feet, he wants to be a real boy.  Seems simple, yeah?  That’s when time travel is involved and the book muddies up A LOT.  The last 4 pages were some of the hardest to follow writing I’ve ever read.

There’s nothing wrong with the B and C X-Men characters to get their time in the light.  I’m hoping that #2 clarifies the mess left at the end of the first book.  This could get interesting if it does.