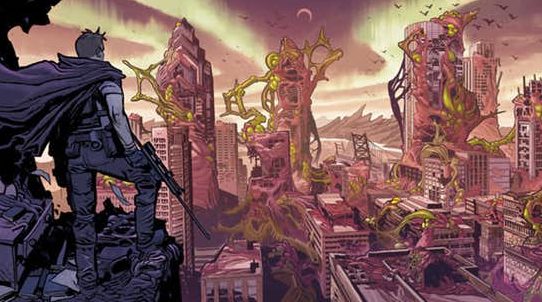 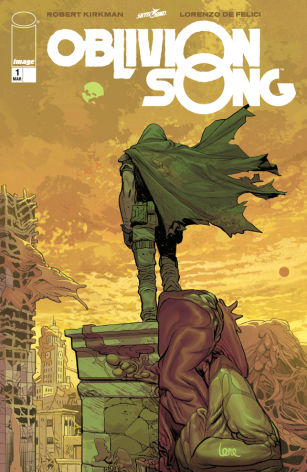 From The Publisher: “A decade ago, 300,000 citizens of Philadelphia were suddenly lost in Oblivion. The government made every attempt to recover them, but after many years, they gave up. Nathan Cole…won’t. He makes daily trips, risking his life to try and rescue those still living in the apocalyptic hellscape of Oblivion. But maybe…Nathan is looking for something else? Why can’t he resist the siren call of the Oblivion Song?”

I’ve read a ton of comics since starting with this site.  Some good.  Some mediocre.  And some downright flushable.  This is the first time since I’ve been reading comics that I’ve been sucked into a world created on the page so completely.   The transitions between scenes were flawless and the story flowed so well that I was lost in the struggle in Oblivion. The transitions to the “real world” felt like flashbacks supporting the story.   Breathe.

I feel obliged to mention that this series is penned by Robert Kirkman.  If you don’t know who that is, well, turn on AMC.  Dude is the WALKING DEAD, YO!   He’s easily created one of the most popular comics of the last decade (and certainly the most popular black and white book).   Now for the kicker: I’ve never read a single Walking Dead book.  Or watched a single television episode.  So I’m coming into this a bit of a Kirkman-virgin. [Awkward silence ensues]

Back To The Real World

You can’t praise the writer of this book without the art.  De Felici has the most appropriate style for this book – transitioning between the drabs of Oblivion and the dynamic colors of the real world.   I found myself stopping in the Oblivion sections to admire the level of detail that he places in the background.  Putting detail in a linear story-telling method is rare since most readers are trying to get to the next frame.  It’s just plain beautiful.

Every person who reads comics today should be reading this book.  A gold plated spine couldn’t make it any better.  And maybe you will be the one in one thousand that gets your hands on the special edition statue, etc.  It’s out there – go find it.  Maybe that’s your perfect – mine is already in this book.