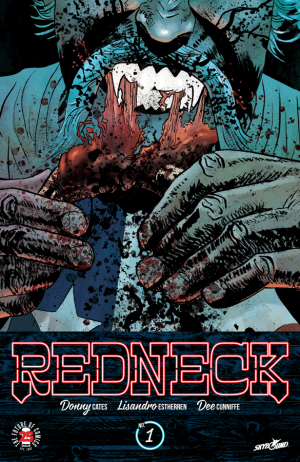 The Bowmans are VAMPIRES who have quietly run the local barbecue joint in their small town for years, living off cow’s blood. Their peaceful coexistence ends as generations of hate, fear, and bad blood bubble to the surface–making it impossible to separate man from monster! Critically acclaimed writer DONNY CATES (GOD COUNTRY) and artist LISANDRO ESTHERREN serve up the tale of a DIFFERENT kind of family just trying to get by, deep in the heart of Texas.

Vampire stories have kind of gotten pushed aside in recent years thanks to the Zombie thing… and also because Twilight was pure suckage.  I said it.  So there.  However – during the vampire upswing I don’t believe that I ever saw I story about vamps that were also rednecks.  This might be the first.

I was looking for the same level of character development and sarcasm that we see in Cates’ other book: 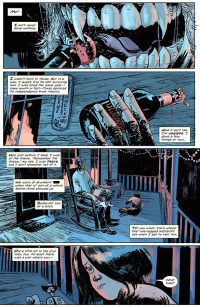 God Country.  I was a little let down by how slow this book took get to its single goal – to really drive home that the Bowmans are vampires.  There is a ton of conversation that really could have been compressed down to a couple of pages of development.  There’s also a section where the main protagonist “loses time” during which he does bad things.  While I see why you would want to do this to keep a little of the mystery in play – there needs to be a better balance between the verbal diarrhea and the action.

What also bothers me about the current horror genre is why the art has to be so darn rough.  By this I mean that it’s all outside the lines brush strokes and incomplete inking.  Content creators are feeling the need to follow the Walking Dead formula but they need not do it.  This isn’t Lestat (classic vampire character) by any means but it should have been a little cleaner (there’s one panel that’s trying to portray surprise, but it comes off as a levitating beer).

If you are a fan of Walking Dead – this might be up your alley though.  The book seems to share the tone of that franchise and had potential for the future of the story – even if it seems that the first book is a little drawn out.