The Inhumans have long played a supporting role to other, more established brands in the Marvel Universe; however, in recent years they have been brought to the fore, competing for mindshare alongside such heavy hitters as Spider-Man and the X-Men. A tall order to be sure.

It doesn’t help that in many ways they resemble a less compelling version of the X-Men: a group of superheroes representing a distinct race, looking to protect and further their people’s interests in a world bursting at the seams with super-powered-beings. I’ve had trouble seeing this franchise as more than a part of Marvel’s plan to flood the market with as many titles as they can print. But with Royals #1 there is finally a premise with great promise for telling a compelling tale of Terrigen infused, spacefaring adventure!

In the aftermath of Inhumans vs. X-Men, Medusa and her motley crew have become an endangered species; the Terrigen clouds used to propagate their numbers dispersed to the wind. Along comes Marvel Boy (a fellow Kree experiment) with a new hope for survival (and his own, hidden motivations) that will require the Royal Family to travel to the remains of the Kree home world.

This issue is a little superficial in terms of story, in that it sees fit just to get us from point A to B without real depth or emotional weight. Also, I get it. Someone from the core team is going to die. Constantly reminding me doesn’t make for drama, you have to show me why I should care first. The reveal at the end is too on the nose for me to believe it’s anything more than a red… hairing. Nonetheless, if you’ve read The Ultimates then you know Al Ewing has a flare for the kind of Kirbyesque, science-fiction adventure that Jack would be proud of, so I have high hopes that this series is in good hands.

There is even some Kirby Krackle thrown in by artist Jonboy Meyers, whose dynamic, manga infused style—along with the vibrant colours of Ryan Kinnaird—make for the kind of gorgeous eye-candy that’ll move this series off the shelves all on its own. There is the creative potential here to push the Inhumans out of Attilan and onto centre stage, and I’m pulling for them to pull it off! –Keli 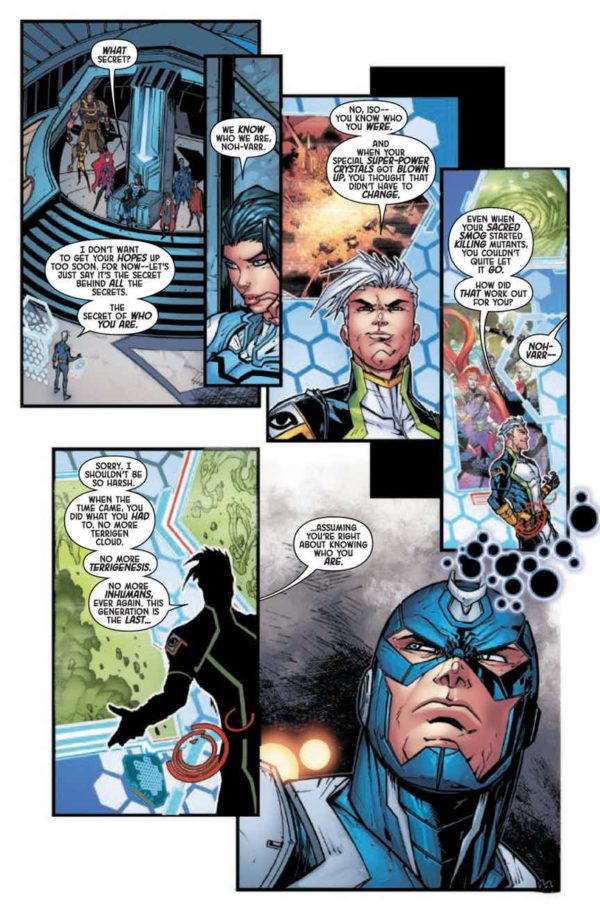