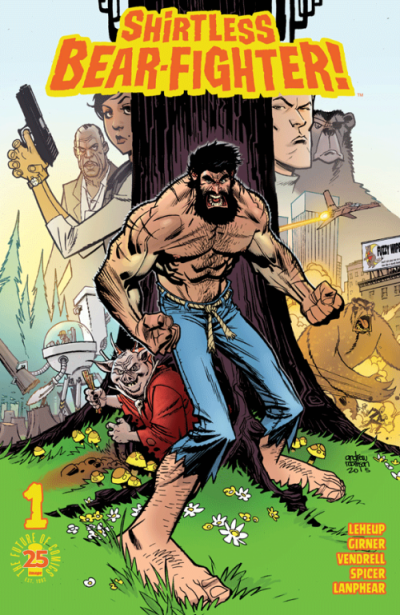 Ok, ok. I know you’re excited for this book but keep your shirt on. One shirtless hairy chested man is enough! Sure it’s true, I’m writing this article with my shirt off (#gonzojournalism), but I literally have two pieces of chest hair. I wish I was exaggerating. Ironically I have the body of a swimmer, but can’t swim. Enough about me though, let’s talk about the other shirtless guy. You know, the one punching bears.

A man raised by bears

Shirtless Bear-Fighter! is written by Jody Leheup and Sebastian Girner and Illustrated by Nil Vendrell, and is ridiculous, hilarious, action packed fun! Bears are attacking the city and the CIA has no choice but to reach out to the Shirtless Bear-Fighter! A man raised by bears, who now as a result of a tragic incident fights bears. Sounds great doesn’t it? Well, it is! This book is full of funny one liners, as well as subtle and not so subtle gags. It’s a hilarious premise, with a fantastic lead protagonist. You can’t help but love this flapjack loving weirdo. He lets his freak flag fly, and his junk flop around with reckless abandon. Plus, he really knows how to kick a bear’s @$$. 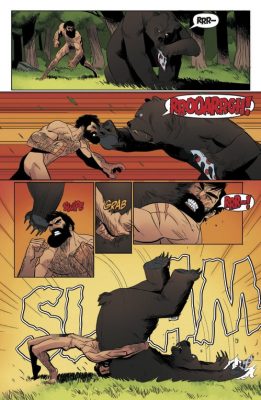 The bear fighting scenes do 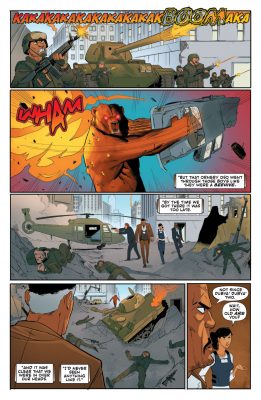 not disappoint, they are super entertaining.

The art reminds me of an adult swim cartoon, which makes sense and fits perfectly. Of course it’s at it’s best when our hero is doing his thang, but it’s consistent throughout. I’m excited to see where the story will take us, and am equally excited for issue 2 which promises the introduction of a sure to be hilarious character The Hillbilly Warlock! Whatever happens next you can be sure, there will be lots of Man Vs. Bear combat and exposed chest hair. Two things that all comics should have.

So put on a shirt (mainly as a courtesy to Chris, because he doesn’t want to see that) and head to Alpha to grab your very own issue of Shirtless Bear-Fighter! It’ll make you feel manly and tough without actually having to be either of those things. Live vicariously through this Ursidae eradicating fiend, and experience all the fun of fighting a bear from the safety of your bear free home. 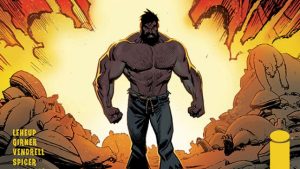 “Sometimes god makes a mistake and makes a man too much of a man.”