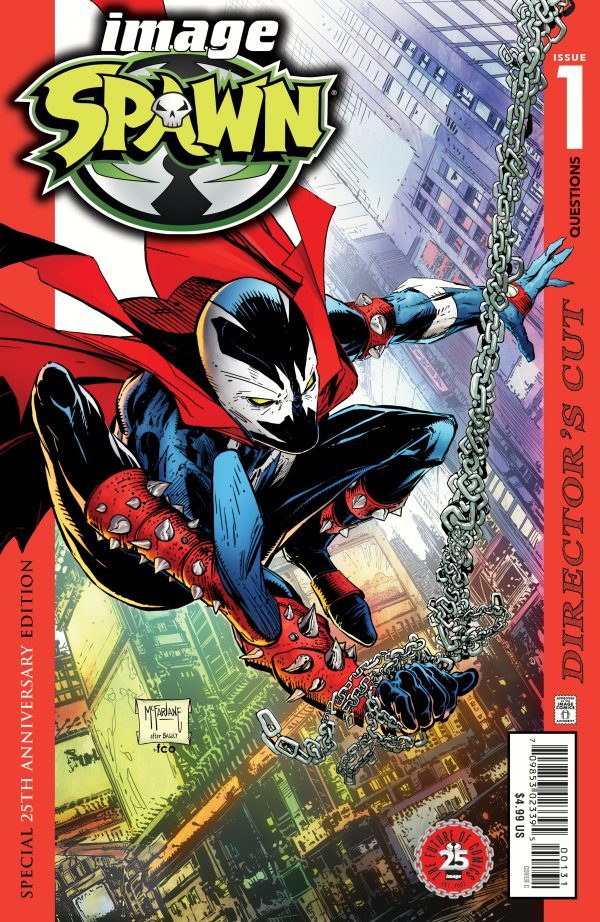 Written and Illustrated by Todd McFarlane 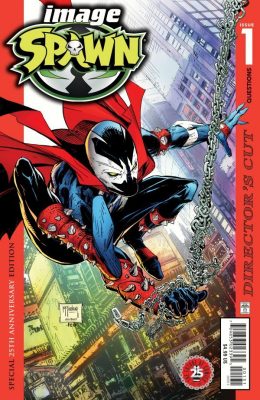 25 years of Spawn. That’s 25 years of demon fighting, chain swinging, pervert killing, good times! From the very beginning of this still running series Todd McFarlane (and some other well known talents) have brought us tons of unique and slightly creepy characters. Ones that are lovable like Sam and Twitch, incredibly bad @$$ like medieval Spawn, and some that you hate with every ounce of your being! I talking about Billy Kincaid, and yes I mean the comic character so don’t sue. That character makes my skin crawl, which I guess is an example of McFarlane’s writing skill. With a series as loved as Spawn, it only makes sense to celebrate with a super cool, and super insightful director’s cut.

Spawn #1 – Special 25th Anniversary Edition Director’s Cut (I hate typing this title, but I’m not hip enough to shorten it) is a rehashing of Spawn #1 which was written and drawn by Todd McFarlane 25 years ago (duh!). If you can’t remember what it’s about, then you should re-read it because it’s great! Better yet, pick up this issue and re-read it along with a page by pa 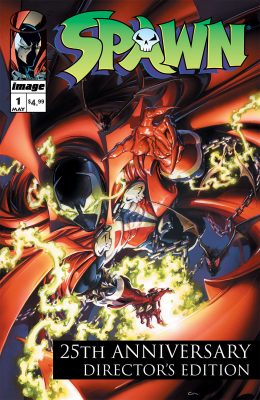 ge commentary by Todd himself. This cut will teach you things you might not have known or even cared about. Plus as an added bonus it includes the first ad and promo ad which is very cool to see. The art is obviously fantastic, because McFarlane has mad skills! If you don’t believe me track down the Ninja Turtle pin-up he did for TMNT #50 – City at War Part 1 (or look down to your right because I’ve included it in this review). This issue uses the original inks opposed to fully coloured pages, but that adds to the charm of this little flashback. If you’re a Spawn completist and I haven’t yet convinced you to pick up this issue, then the only thing I need to say is new covers. Alpha has two to choose from. The one I picked, which is a super cool Ultimate Spider-Man homage drawn by McFarlane, and a slightly less cool but still great cover by Clayton Crain (Savior). 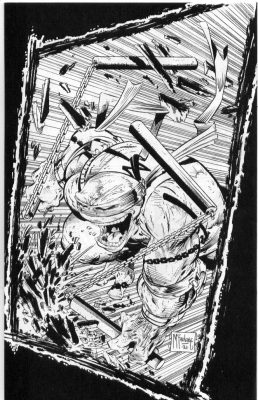 Get this book. Whether it’s to add to your Spawn collection or to start it, you can’t go wrong. If you think it’s too late to start, stop thinking because you’re horrible at it. I will confess right now that I’m actually reading Spawn from the beginning for the first time. I don’t know why it’s taken me so long, this kind of book is right up my alley. Plus I’ve seen the movie many times and love it! Sure the CGI sucks, but the Violator is done perfectly (and is John Leguizamo’s 2nd best role right after his portrayal of Luigi Mario). Anyway, it’s a thrilling read and I’m glad I’m finally doing it. Thanks to Alpha’s hefty supply of Spawn back issues and Spawn paperbacks, it’s a cinch to catch up. So do it, and if you’ve already read them read them once more. It’s never a bad idea to re-spawn now and then.

P.S. This series is still going, so if you like the old stuff check out the new stuff too. Issue #273 is conveniently on the shelf next to this one. Sweet!