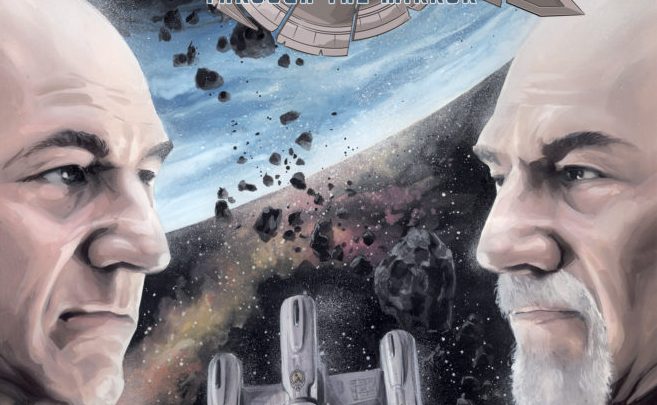 Star Trek: The Next Generation – Through The Mirror

Written by Scott Tipton and David Tipton
Art by J.K. Woodward and Marcs To
Publisher: IDW

From the publisher: “Following up the smash-hit miniseries MIRROR BROKEN, the Mirror Universe Next Generation crew is looking for new worlds to conquer, and they’re crossing over to the Prime Star Trek Universe to find them! Also in each issue: Just how did the Mirror Universe crew find their way to ours, and what does Emperor Spock have to do with it?”

Around this time last year, I reviewed the Star Trek Mirror Broken mini series from IDW.  That series follows Jean Luc Picard as he works to acquire the ISS Enterprise in the mirror universe.  It was an interesting series but at the time I wasn’t a particular fan of the art style.

Back this year with a different layout – IDW is hoping that this will grab a hold of the audience much the same way as the regular Star Trek books have.   In an attempt bring the stories together in the end, they’ve split the book up.  The initial story is the regular universe – Commander Worf recognizes a crew member that should be on the USS Enterprise on a mining planet.  The resulting story is much your tried and true Star Trek TNG story.  The other story is flipped back to the past in the mirror universe with Picard trying to figure out if Spock is alive.  It’s an interesting narrative to be sure.

As far as the two sides go – each one is written by a different writer and illustrated by a different artist.  The “classic” TNG side is Scott Tipton and Marcs To while the mirror side is written by David Tipton and JK Woodward.  Woodward illustrated the first mini series.  I’m not a big fan of the Woodward style – instead preferring the Marcs To style.  However, the styles do create a clear split between the classic and mirror universes.

There’s something here – definitely worth the die hard TNG fan’s time.  And if, like me, you don’t like one of the artists – there’s always the other half. 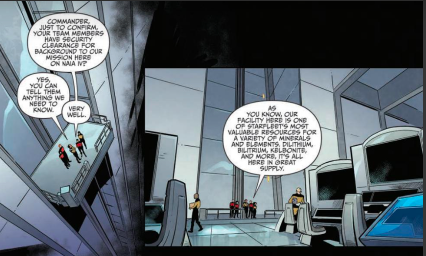