Not since last summer’s Superman Rebirth has a book so encapsulated DC’s attempt to reinject a more spirited tone into their storytelling than Super Sons #1. 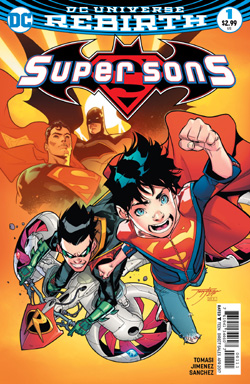 The appeal of this book’s concept will be readily apparent to anyone familiar with “The World’s Finest” pairing of Superman and Batman. In Superboy (Jonathan Kent) we see the reflection of his father’s plucky and earnest heroism, tempered by small town naïveté and not yet having mastered his powers. Likewise, Robin (Damian Wayne) delineates Batman’s stoic demeanour and calculated method. However—as fans of Damian well know—his arrogance and sense of entitlement leaves him brash and defiant. It is these latter qualities of our developmental “dynamic duo” that exemplifies their adolescent short-comings, and allows them to play off each other’s eccentricities in an engaging and complimentary way.

The creative team of writer Peter J. Tomasi and artist Jorge Jimenez manage the same feat in their collaboration here. Tomasi’s script uses strong character moments to push the narrative along; the writing is exceedingly clever with dry-wit woven throughout. My favourite panel has Jonathan deflecting a hail of spit-balls in homage to his father’s bullet retardant frame. Jimenez renders these sequences elegantly with his pencil work and panel layout. His style would play well in animation, with characters exhibiting exaggerated proportions, emotive facial expressions and strong silhouettes. The colors and shadows (thanks to Alejandro Sanchez) are vibrant and stark respectively, rounding out the cartoonish vibe.

The issue is bookended with hints at future developments, but sees fit in spending most of its time letting Damian antagonize Jonathan out of his PJs and into trouble on the side of a Lexcorp building. My only complaint is that the story jumps locations a bit too quickly, lending a pace that does not allow the story to savour every scene. Otherwise, I highly recommend this beautiful illustrated and intelligently written comic! –Keli

Do you agree or disagree? Tweet @kelthe80skid and let me know! 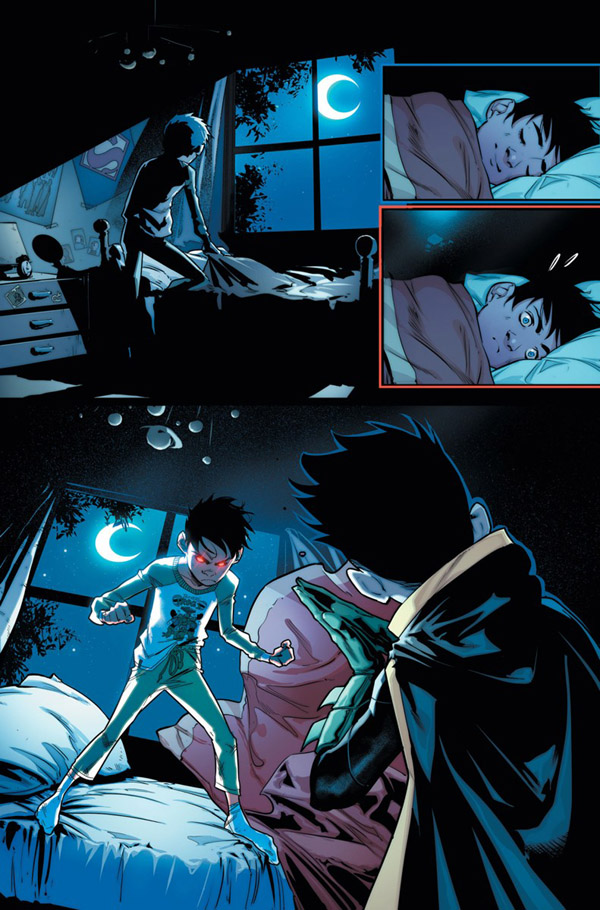