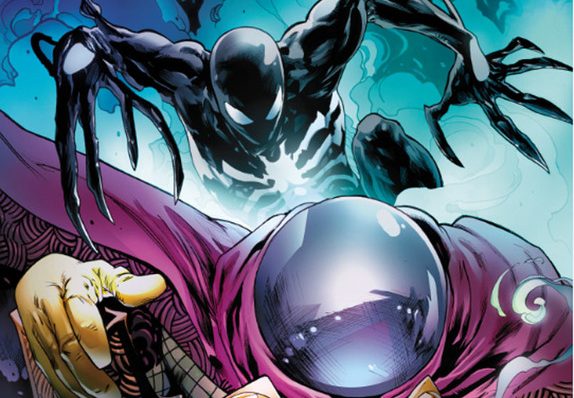 From The Publisher: “Everyone knows that Spider-Man’s infamous black suit would someday become the wicked web-slinger called Venom – but what happened BEFORE Peter Parker discovered the black suit’s sinister secret? Find out in this dynamic tale from comics legends PETER DAVID and GREG LAND!  Set during the original “Black Suit Saga,” this is an all-new tale that pits the wall-crawling wonder against that most mystifying of menaces…MYSTERIO!”

It’s great that we’ve been getting these fancy new re-prints and facsimile editions. It really does a lot to let new-ish readers see the best of the best for our favorite stories. However, for those of us who’ve read it all: we really want new stories. While this story is not necessarily original, it does give us some insight where there was none.

The story happens right after Secret Wars. Peter has just gotten his new “suit” and still believes that it’s just alien technology. He’s still super excited about his new toy. And he’s also still dating Felicia aka Black Cat. So this feels right for the timeframe the writer is aiming for.

If you think of this as an “extra” to the Amazing Spider-man Blu-ray of sorts, it’s a nice addition to the black suit saga. My person tastes aligned with the art style by Coello – strong inks with some really vivid colors. As well, it’s one of those few times where the cover artist (Land) looks much like the inside pages. Groovy.

It’s a short story involving some classic characters and villains (Mysterio). It’s only five books long. As such, it’s a nice snack to clear our Spider-man pallet while we work our way through the current Hunted event.