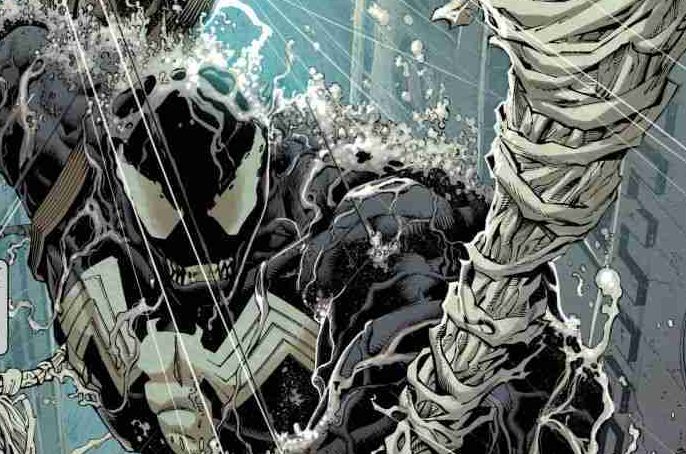 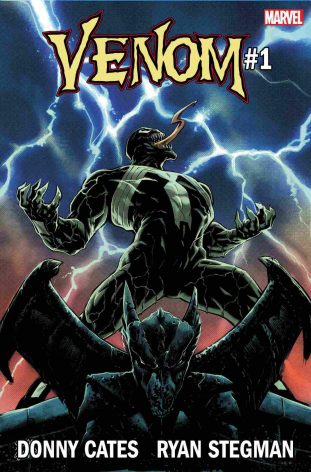 From Marvel: “In the wake of S.H.I.E.L.D.’s collapse, an ancient and primordial evil has been awakened beneath the streets of New York, and with it, something equally evil has awakened in that most Wicked of Webslingers – VENOM! Still a Lethal Protector of the innocents in New York, this never-before-seen threat could force Venom to relinquish everything it holds dear – including Eddie Brock!“

Venom for all intents and purposes has been around since 1984.  Originally introduced as a living alien costume in Amazing Spider-man #252 (and incidentally the first comic I ever owned), it was first called by its official name in Amazing Spider-man #300.  Spider-man, however, realized that he was being use by Venom and separated himself from the alien symbiote.  Others have been hosts to Venom since then including Eddie Brock, Mac Garage (Scorpion), Flash Thompson, Lee Price and a list of smaller side hosts like Deadpool.

For all intents, this story is a new jumping on point with Venom back with Eddie Brock.  The story doesn’t explain why he’s back with Eddie yet.  It does reference that there have been other hosts before Eddie.  The Venom symbiote isn’t feeling all that great at this point.  Eddie Brock is his normal broken soul (he lost his job as a reporter as a result of what Spider-man did and is just squeaking by).

For the hardcore Venom fan who has been reading the main Venom story, as well as the Venomized event and Poison-X crossovers, this might feel like an abrupt turn.  As I said before, this is the perfect time for casual readers to jump in.  As of yet, we don’t know if there’s going to be any correlation with the Venom movie from Sony.  All part of the mystery!

The writing is on par with the existing Venom stories.  Donny Cates has been busy boning up on his skills with his Image books “God Country” and “Redneck.”  In addition, he’s been involved in so many projects we can’t list them all here.  It appears that everything we’ve seen from Mr Cates show that Venom is a culmination of that experience.  The discussions between Eddie and the symbiote are well formed and easy to follow.  The new readers jumping in should have no issue at all understanding the concepts here.

Now I have a confession to make here: I have not been a fervent Venom fan.  My Marvel 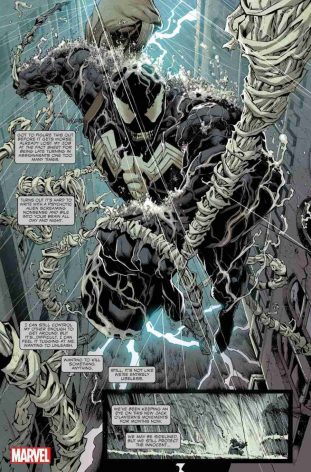 book of choice has always been Amazing Spider-man.  By association, I’ve read Venom stories for years back and forth as a result of the origination of the character in those pages as well as the major crossover stories.  In recent months I’ve been following the 30th Anniversary content like Venomverse and Venomized.  I’m by no means a stranger to the concept: I just didn’t have a reason to jump on.  I now have that reason and his name is Ryan Stegman.

Readers of Amazing Spider-man are well aware of Ryan Stegman.  Besides the recent Renew Your Vows and Venom Inc stories, he headed up the Superior Spider-man concept that killed Spider-man, brought him to life as Doctor Octopus and the restored everything back to original.  So as far as recognition goes – we got this.  Ryan Stegman’s art is top notch and quite honestly some of the best looking inking of the last ten years.  And that includes Wolverine (which, again, hadn’t read it until he was on board).  I can’t think of anyone more capable of pulling this off.  And he certainly does it with style: Eddie’s broken persona meshes well with the symbiote’s bulky exterior.  It leads to to some tasty stuff.

Now that the Stegman-for-president campaign has ended – I only can say one thing.  Buy this book – the dual nature of the character hasn’t been this deep in years.  Let’s hope Marvel knows a good thing and keeps Cates and Stegman on this project for quite some time!