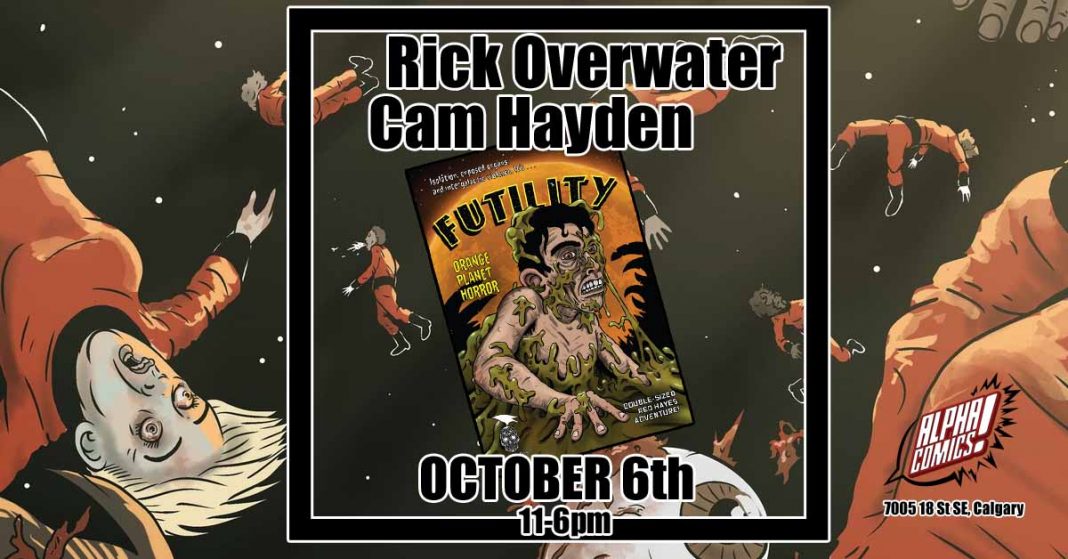 Meet the creative team behind FUTILITY!
Rick Overwater and Cam Hayden will be at Alpha Comics. Saturday, October 6th. Be there! 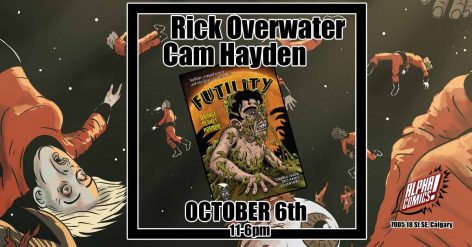 July 16, 1969 — Apollo 11, carrying Neil Armstrong, Buzz Aldrin and Michael Collins, leaves Earth on mankind’s first trip to the moon. Aldrin will later report seeing something outside. Some will speculate it is a UFO, or perhaps a detached panel from Apollo 11. It is neither. Unbeknownst to the world, there is a Midwest farmer, who once served in the Airforce with Aldrin. A farmer with something to prove…

The comic was originally conceived by two Calgary band geeks. They shoe-horned in tributes to some of their favourite classic sci-fi comics like Spacehawk and Weird Science (this list keeps getting longer as they dig for new material to rip off, er, pay homage to). As interpreted by kids who grew up on Heavy Metal, Mad Magazine and of course all the classic Marvel and DC stuff.

But, needless to say, they were not interested in creating some pure-hearted role model bitten by a radioactive bug, launched as a baby from a dying planet etc., etc. They wanted a truly flawed character—not some noble guy like Hamlet either.

So what you get is Red Hayes, a straight, white, 40-something farmer in the Sixties. Communism terrifies him. Hippies offend him. Women’s lib confuses him. But if he thinks America is going to hell because of that stuff, just wait til he sees how strange it gets in space. The Futility creative team has plenty of ways to make him squeamish.

Maybe there’ll be some character growth and a little socio-political subtext buried in his exploits too. Maybe.