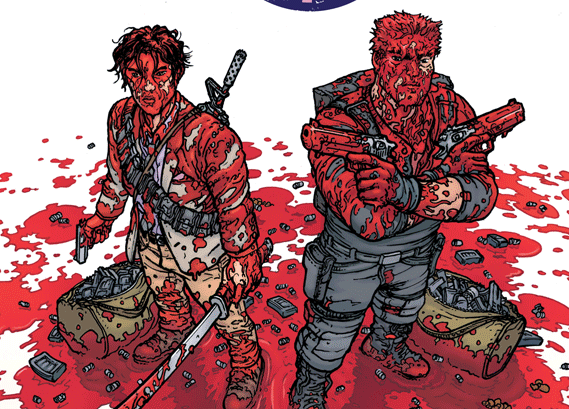 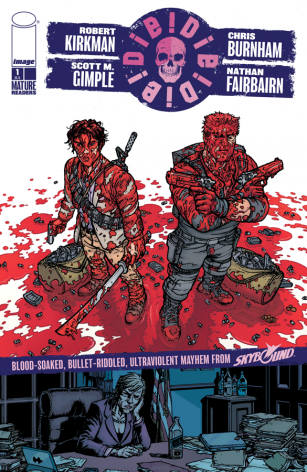 From the publisher(s): “Blood will flow, Bullets will fly and the mayhem will never end, Die!Die!Die! brings all the action you could ever want.”

As with everyone reviewing this book today, we were given no advance notice of its pending release.  Robert Kirkman, international man of mystery, felt that for his next trick he should surprise the comic buying public.  He felt that books get spoiled or leaked too early for there to be maximum enjoyment.  I’m paraphrasing all this – his “letter to the reader” at the end of the book explains it all.  While this book isn’t entirely an original concept, it certainly is entertaining.

This book is basically Kirkman’s version of Jason Bourne.  As far as we can tell at this point, the books are narrating based on two different viewpoints.  One is the of the political puppet masters.  The other is that of the assassins that work for them.  And there’s no line to cross here because the line is completely missing.  Sex, drugs, blood and mayhem.  It’s basically Westworld Season 2 level bloodletting here.

The writing has the feeling of a Kirkman penned story in that it feels like A Walking Dead story as far as pacing and verbiage.  However, there is another reason it feels this way.  Scott Gimple is Kirkman’s co-writer here.  Scott was the show runner for Walking Dead up to the end of season eight (and them moved on the Chief Content Officer for the WD empire).  He’s in tune with Kirkman’s style and that creates a seamless concept here.  One has to think this is being set up for another media empire in the near future…

The art fits the dark style of the book.  Chris Burnam style, seen recently in the Batman Incorporated series, is brooding and concise.  You don’t have to guess what he’s trying to convey here.  In a story with a ton of dialog aimed at the reader, you need the art to stand on its own.  It does well.

So, surprise!  It’s out tomorrow.  It’s a Kirkman book so it’s a likely success like predecessors Oblivion Song and Walking Dead.  The pedigree is strong and it’s nice to see it has a story and art to match.