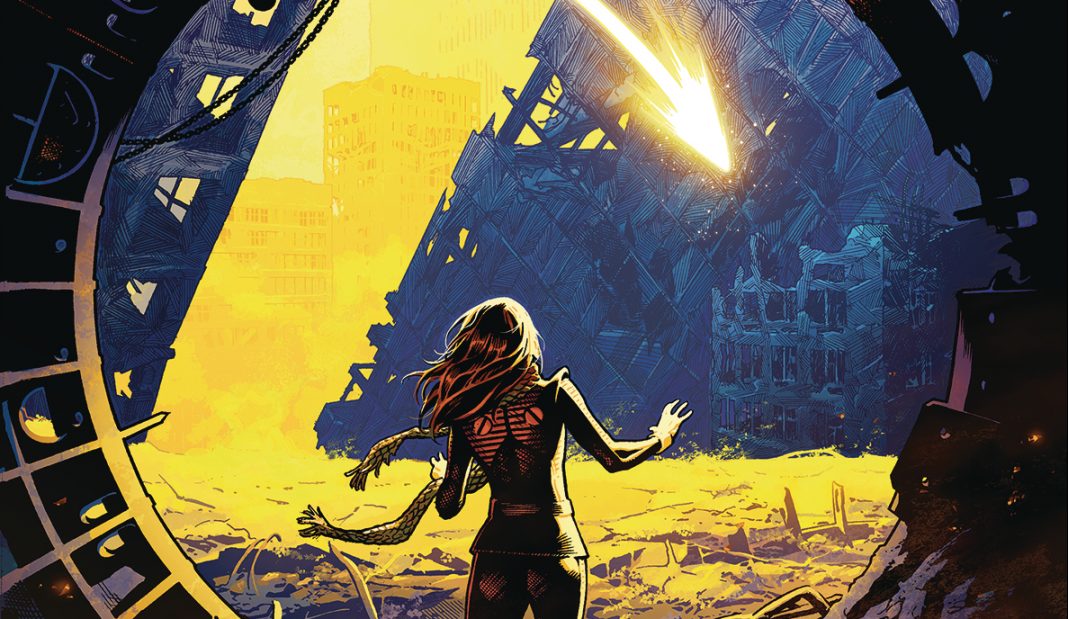 Brought to you by some of comics’ greatest talents, this epic story spans the course of 1,000 years and, for the very first time, connects all of DC’s future timelines! Starring the unlikeliest of DC heroes as she learns to cope with newfound immortality and roams through the disparate societies of Batman Beyond, Kamandi and Tommy Tomorrow, wrestling with her own inner demons and desperately trying to find her purpose in an ever-changing world. Do not miss this truly unique take on tomorrow’s DC Universe, all leading up to a special launch on the millennium!

From Entertainment Weekly: “Since its Silver Age origin, the Legion of Super-Heroes has been the cornerstone of the future DC Universe,” said Bendis. “Over time, a wealth of future characters and stories have emerged since the Legion’s beginnings and connecting these threads to an updated version of the Legion is a story Ryan and I can’t wait to tell.”

WHO IS CADAVEROUS?!
The most shocking and incredible comic of 2019 is here as J.J. ABRAMS (STAR WARS, STAR TREK, SUPER 8) and his son HENRY ABRAMS are joined by superstar artist SARA PICHELLI (MILES MORALES, GUARDIANS OF THE GALAXY) team up for SPIDER-MAN! What do they have planned for Peter Parker and Mary Jane Watson?! Who is Cadaverous?! The Modern Master of Mystery Makes His Marvel this September!

That teaser campaign we’ve been seeing counting down the Sam Raimi- numbers? Yeah – it’s not that. It’s this. And JJ Abrams and his son Henry is at the helm per The New York Times: From JJ himself “I remember working in a comic store in high school and there was the Amazing Fantasy comic that Spider-Man first appeared that they had under glass. It really wasn’t until that job that I started to get into comics. And while I’ve never been the die-hard comics fan that Henry is, I’ve always appreciated the way that an emotional and weirdly relatable story is being told through this extraordinary circumstance.”

SUPERSTARS JASON AARON & ESAD RIBIC CONCLUDE THEIR EPIC THOR STORY! The creators of the legendary THOR: GOD OF THUNDER series that kicked off one of the most epic runs in Marvel history are back together for one last ride with the almighty Lord of Asgard! Seven years ago, Jason and Esad introduced the Thor of the far future, All-Father of a broken realm and a dying universe, as he stood in against the Butcher of Gods, wielder of All-Black the Necrosword. Now that nefarious blade has returned, in the hands of Thor’s all-time greatest enemy –  his brother, Loki –  for one final, cataclysmic showdown. Behold the book no comics fan should miss –  the celebration of the end of a truly Marvelous era.

And my dark horse pick for September is:

Tyranny is on the rise as Cobra topples governments and spreads its ruthless power across the globe. In these trying times, desperate measures are taken. The new G.I. Joe program recruits civilian spies and saboteurs: ordinary people, living in occupied territories, who will put their lives on the line to strike back through clandestine but high-impact missions. Join these new recruits as they resist Cobra control, fight to make a better world for all, and find out just what they are capable of.
* Featuring your favorite Joes, alongside brand new characters!
* A new vision of G.I. Joe for a new generation!
* G.I. Joe like you’ve never seen before!

From IGN: While both Allor and Evenhuis worked on IDW’s 2013 G.I. Joe series, this book will serve as a fresh start for both readers and the characters. Allor confirmed via Twitter that the new series is a complete reboot not connected to any previous G.I. Joe comic. In that sense, the series appears to be similar to IDW’s current Transformers comic, which rebooted that franchise in the aftermath of last year’s Transformers: Unicron crossover.