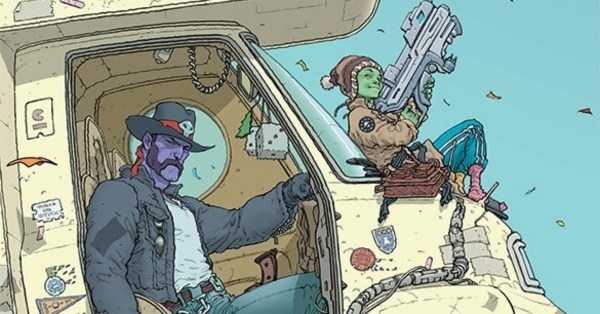 From the Publisher: Set in a brilliant new sci-fi universe, Sharkey is a blue-collar bounty hunter who tracks criminals across the galaxy in his converted, rocket-powered ice-cream truck. Aided and abetted by his ten-year-old partner, he’s out for the biggest bounty of his career.

Space is not only the final frontier, it’s also the perfect place for good old fashioned debauchery. Whether you’re guzzling down intergalactic brews or pursuing the embrace of a titillating tentacled lover, I promise I won’t judge. However, I suggest you keep your actions legal. If you don’t, you may just find yourself targeted by the one . . . the only . . . Sharkey The Bounty Hunter!

Sharkey The Bounty Hunter is the newest creation from Mark Millar (Kick-Ass) and is the third Millarworld/Netflix collaboration. This should mean that we’ll eventually see this character hit the small screen. However, until then we have a six issue series to keep us spaced out. This book promises to introduce us to a brand new sci-fi universe which plans to be in a galaxy far far from a PG rating. So far, it’s holding up to this promise. The content is definitely geared for a more mature audience there’s violence and nudity and spaceships! Everything a grown up sci-fi fan could want. Sharkey is a gruff bounty hunter with a kind heart and a knack for getting into trouble. Pair him with a homeless kid and stick them in a refurbished Ice Cream ship and you have the makings of a true sci-fi classic.

Right off the bat Sharkey The Bounty Hunter gives us a good mix of humour and action as it sets up its slumy new universe. I think this will be a good series to get into for those looking for a more R-Rated alternative to Star Wars or Star Trek. If nothing else, the art is definitely worth checking out. Simone Bianchi (Thanos Rising) has the perfect style to bring to life the grungy intergalactic cesspool of a universe Sharkey calls home. Some of the alien designs in this book are pretty stellar and surprisingly unique. Which I think is a feat upon itself.

Sharky The Bounty Hunter is what probably would have happened if George Lucas did a remake of Leon The Professional and cast Burt Reynolds in the lead role. If that sentence doesn’t sell you on this book, nothing will.