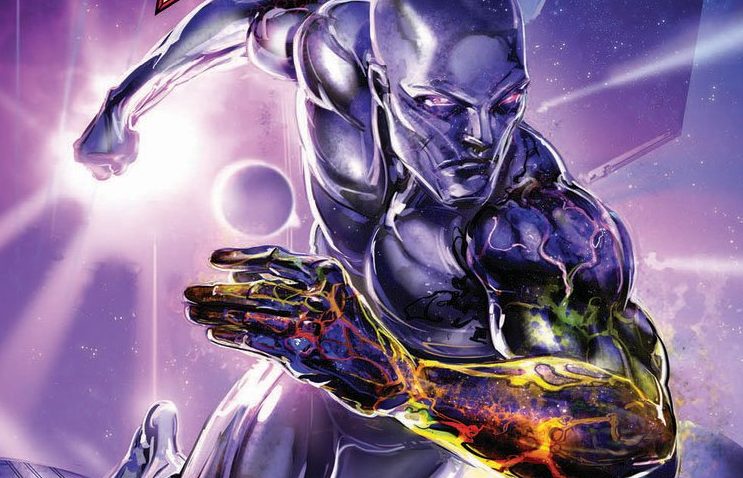 From the Publisher: “Spinning out of GUARDIANS OF THE GALAXY #1, almost the entire galaxy’s defenders have been blown through a black hole, including the Silver Surfer! But the story doesn’t end there… In order to fight back the oblivion, Surfer will have to fight to save his own soul and not lose himself to the void. Follow the Sentinel of the Spaceways on a journey that will change him forever!”

Silver Surfer has been cruising around with the like of Beta Ray Bill and Stormbreaker for the last little bit. Mostly to see the final downfall of Thanos, of course. However, the recent restart of Guardians of the Galaxy has all attending the funeral sucked into a space hole. As a result, they form the new Guardians (no spoilers there – that book has been out for quite some time now). And there are parts of this book that is directly connected to the Guardians of the Galaxy Annual #1 coming up in the next few weeks.

The Surfer is off on his own for the moment, still floating through space. He spends a good portion of time in this book self-reflecting on his life as the Herald of Galactus – watching worlds die. At one point in the story, he gathers up enough strength to pull himself back to reality and faces a foe that fans reading the recent Venom books know all too well.

The review here is that the book has a very slow burn for most of it before it smacks you in the face in the final page. Being a six-part series means that it’ll need to get going fairly quickly in the next few issues so that part doesn’t worry me. The art by Moore is almost like an acid trip: a Technicolor Dreamcoat if you will. Makes for a really fun book to read.

If you read Venom, Guardians of the Galaxy or any of the Thanos/Black Order books, you’ll feel right at home with the story here.