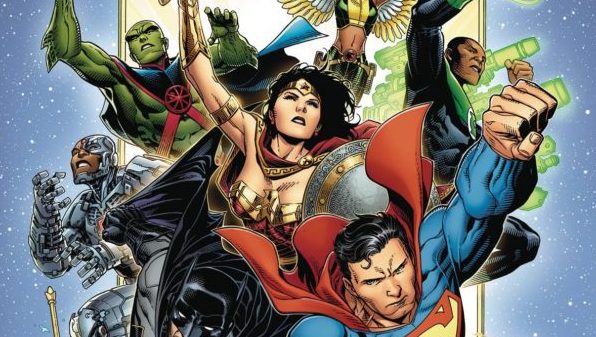 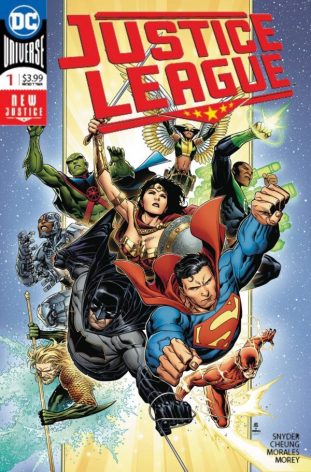 From the publisher: “THE TOTALITY” part one! A brand-new era begins here! Comics legends Scott Snyder and Jim Cheung launch the Justice League into a cosmos-shaking mystery that will draw out their most terrible foes…in ways our heroes couldn’t possibly imagine! In this debut issue, Martian Manhunter struggles to protect the team from an incoming threat that will shatter the world as they know it, while a familiar face strikes out on a dark path…”

Since 1960, the Justice League has been gracing the pages of DC Comics.  Introduced by Gardner Fox in The Brave and the Bold, the league consisted of original members Superman, Aquaman, Flash, Martian Manhunter, Batman and Wonder Woman.  Since then, there have been quite a few iterations of the League but the core group has persisted.  This new book is based around the same core group.

This new Justice League revolves around Martian Manhunter J’onn J’onzz and his evolving relationship with the team.  Balancing whether his involvement is that of a member or the leader, J’onn reflects on what happened in his past with the loss of his family and how that relates to his current situation.

This story continues on from events Dark Nights: Metal after the breach of the source wall. The wall was the edge of the known multiverse.  Anyone that had tried to pass it previously had been trapped in it (such as Darkseid).  However, now that its been breached, nothing is stopping certain forces from coming through to the current multiverse.  This is inherently the crux of the new Justice League story.

As an aside, there is also a super group of villains that include Joker and Grod amongst others.  That Legion, you might say, has a vested interested in the events occurring during the story.  It’s an interesting ying to the Justice League’s yang.

I love the interactions between the team members.  It takes on a little more of the sarcasm that was present in the movie.  A funny moment occurs with the team poking fun at the way Batman talks.  J’onn’s stern demeanour is a constant throughout the book so the levity creates a nice balance.

Originally I had written this from an early version of the book provided by DC a few weeks ago (no color, very much in development). Scott Snyder is working Justice League much like he did with early New 52 Batman – and that’s a good thing. The art style in the final book allows for the story to be portrayed via vivid and colourful imagery very much indicative of the different characters in the League.  It is odd that solicits as recently as March showed Jorge Jimenez and Jim Cheung as the artists.  It appears that before things got rolling, Mark Morales took over for Jimenez.

Nonetheless, the book is a grand continuation from the recent events (See Justice League: No Justice and Dark Nights: Metal).   The good part is that this isn’t a reboot of the series.  It’s more of an adjustment to the direction to be a little more in line with the DCEU and the other DC books.  Well worth a read!