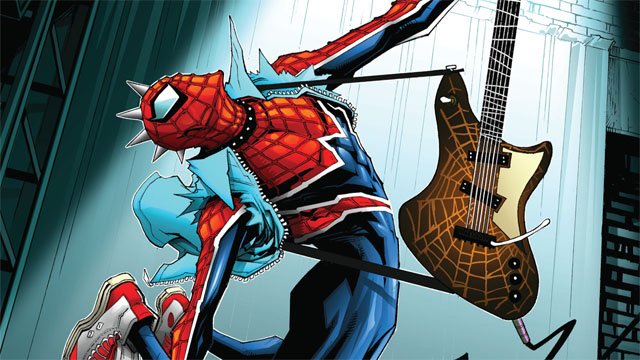 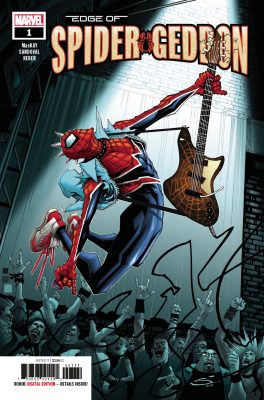 In the Marvel offices there must be a motto that says “If a story arc is popular, it has to be rehashed!” If it’s not a motto, than it’s definitely office scripture. Either way, the mighty Marvel machine is at it again, this time giving us a follow up to Spider-Verse called Spider-Geddon. Like it’s predecessor, this apocalyptic epic is kicking things off on the edge with four Edge of Spider-Geddon one-shots. And the first one is crawling with punks!

On Earth-138 things are different on the streets of New York. In order to keep the peace, one requires a form of crime fighting that is a little less amazing and a little more anarchic. Cue Hobie Brown a.k.a Spider-Punk (but don’t call him that, he likes to go by Spider-Man), who rocks a sweet punk costume and swings a bad @$$ bat. If you mess with his neighbourhood you’ll be seeing a not so friendly neighbourhood Spider-Man, and possible be picking out face slivers for the rest of the week. Obviously you’d have to be crazy to mess with this spider powered rock n’ rolla, however that won’t stop our mystery super villain and his sinister capitalism heavy plans.

The Edge of Spider-Geddon one shots are designed to give us a look at alternative versions of Spider-Man who’ll be key players in the upcoming Spider-Geddon event. Back when Spider-Verse happened, this was hands down the best part of the series! I have a feeling I’ll feel the same way with this event as well. These one shots are lots of fun! They show us cool new versions of New York and the character’s we all love. This issue in particular is one H E Double Hockey Sticks of good time. Spider-Punk is really cool, the humour is well paced, and the action is anarchic. Our spike headed hero definitely puts his trusty bat to good use. There are also 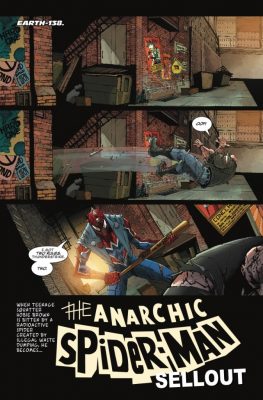 some wicked cameos of some punkified avengers.

I really need to give credit to Jed Mackay and Gerardo Sandoval for giving us a well written/illustrated adventure, that has actually gotten me interested in an event I was planning to avoid. Spider-Punk was one of my favourite characters from Spider-Verse and they definitely did him justice. The villain of this story is the perfect villain to put up against our anti-hero. His entire scheme clashes with the very essence of the Spider-Punk and the very core of his ideals. This of course leads to a bat bashing conflict, and an anarchy filled good time! The character designs done for the punk versions of the characters I won’t mention, look fantastic! Sandoval definitely rocked it on this issue!

The End Is Several One-Shots Away

Spider-Geddon is being called the Spider-Event of the year by the people selling this book, so it must be true. I bet you’d feel pretty silly if you missed an event like that. I know I would. Give this one-shot a shot and if you don’t enjoy the read then burn the book and move on. Spider-Punk is an awesome character, and this is an awesome story. You won’t be disappointed. If you like this issue and want to read more, then check out the next three Edge of Spider-Geddon one-shots. Also keep you eyes open for other Geddon related titles. Including Superior Octopus which will start during this event.