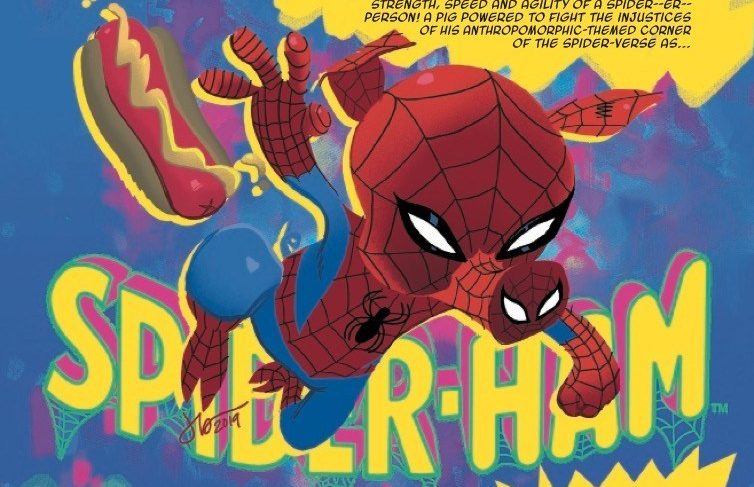 From the Publisher: FEATURING SPIDER-HAM! When Spider-Gwen’s dimension-hopping web-watch falls into the wrong hands, it’s up to everyone’s favorite wisecracking web-slinger, the wily waddler known as SPIDER-HAM, to save the day! From the same creative minds that brought you INTO THE SPIDER-VERSE and Spider-Gwen creator JASON LATOUR, you won’t want to miss this interdimensional epic!

The book is called: The Spider-Man Annual presents Peter Porker The Spectacular Spider-Ham. That is a mouthful for any book. The great minds at the Marvel machine said: “! if the book is absurd, let’s make the title equally assinine!” Good job. You win.

The book is absurd in the best possible way. Much like the character (and subsequent home video short on the same subject) from Sony’s Spider-verse, Spider-ham compares to Ren and Stimpy more than Iron Man. Phil Lord has co-written these stories of the Porker before and after his trip through the ‘verse. With appearances by (no joking) Spider-, Ducktor Doom and J. Jonah Jackal of the famed Daily Beagle – lovers of classic Saturday morning fare will be over the moon.

In addition, you also get a short story by both Lord and Chris Miller – featuring an absolute menagerie of characters including Howard the Duck. These stories are consistent with the theme (of both the movie and the previous iterations of Spider-ham.

To be fair, this isn’t Batman Damned level writing. It’s not meant to be. The book hails back to when you bought a book, read it and rolled it up. Stuffed in your back pocket riding down the road on your bike. It’s certainly a bit of nostalgia for some. Witty humor for others. In the end: full of fun for all.