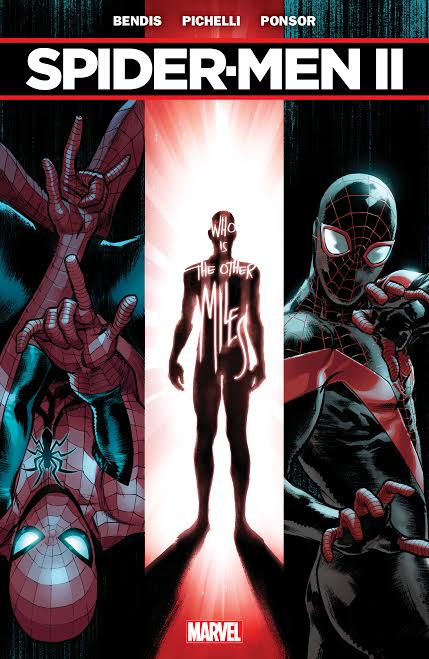 I know what you’re thinking. Your double visions got the best of you, and it always gets the best of you. However, this time you’re wrong. You actually are seeing two Spider-Men, and you shouldn’t be that confused because they look completely 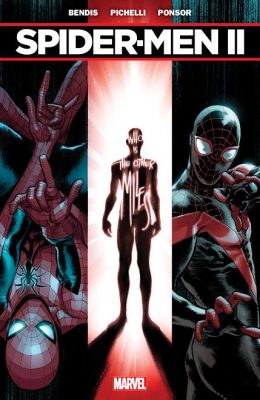 different. Height wise, suit wise, and even pose wise. This is due to the fact that they are different people, and they’re not even clones. So you can stop spreading that conspiracy. Brace yourselves, because you are about to enter a world of Spider-Men. Which in case you’re still confused, is the plural term for Spider-Man. Meaning there are two of them.

Just The Two of Us:

Spider-Men II is a follow up to the popular 2012 miniseries Spider-Men. This series brings back two dream teams: Peter Parker & Miles Morales, and Brian Michael Bendis (writer) & Sara Pichelli (illustrator). A lot has changed since Spider-Men, including the merging of Peter’s and Mile’s worlds. Miles is now the current Spider-Man, and Peter has happily allowed this. However, a strange glowing beam coming from the same warehouse that housed the dimensional rift in their previous team up, has brought our heroes together once again. Can they work together to save the day? Also,what exactly did Peter find out about the Miles Morales from his dimension? I’m sure we’ll find all that out, but not right away. Bendis will definitely makes us wait as he slowly reveals the answer. Which is how it should be done, so don’t complain.

Bendis is a Marvel Master, so of course you can expect an intriguing story that will keep you entertained and enthralled. You probably won’t be able to guess where things are going until they get there. In this issue the interactions between the two Spider-Men are quite comical, they have a great teacher/student type dynamic. Though at times you probably won’t guess who’s teaching who. I was 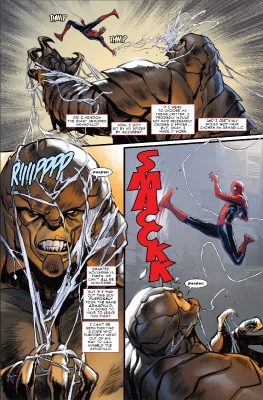 very excited to see the appearance of my favourite Avengers Villain at the end of this issue, and can’t wait to see the Spider Friends take him on in #2. Also, I’m intrigued to see what Bendis has planned for this dimensions Miles. The little bit we see looks super promising. Sara Pichelli’s art is unreal good. Her facial expressions look realistic, and her illustrations look almost live action. Her action scenes pop and her characters look slick. Especially her take on the aforementioned Avengers Villain. He looks incredibly badass. She’s got some serious skill, if you don’t believe me check out pages 16 & 17.

This book boasts an amazing creative team, and should not be swung by. It’s a must read for Spider-Man fans, and if anyone in this world doesn’t like Spider-Man they should try to read this too. If you’re worried about not understanding things because you didn’t read the first series, stop worrying. You don’t need to know anything going in, they give a recap and it’s a stand alone story as well. However, if you must read things in order, pol 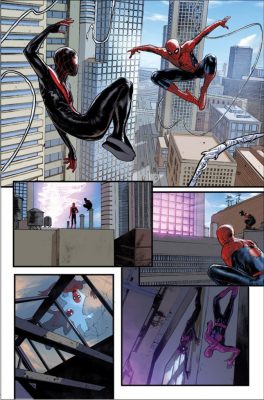 itely ask Chris to bring in a collection for you. So pick up this book, and if it’s a story you want to stick to put it on your pull list. Double your Spider-Man intake, and take time to appreciate a good well needed number two.