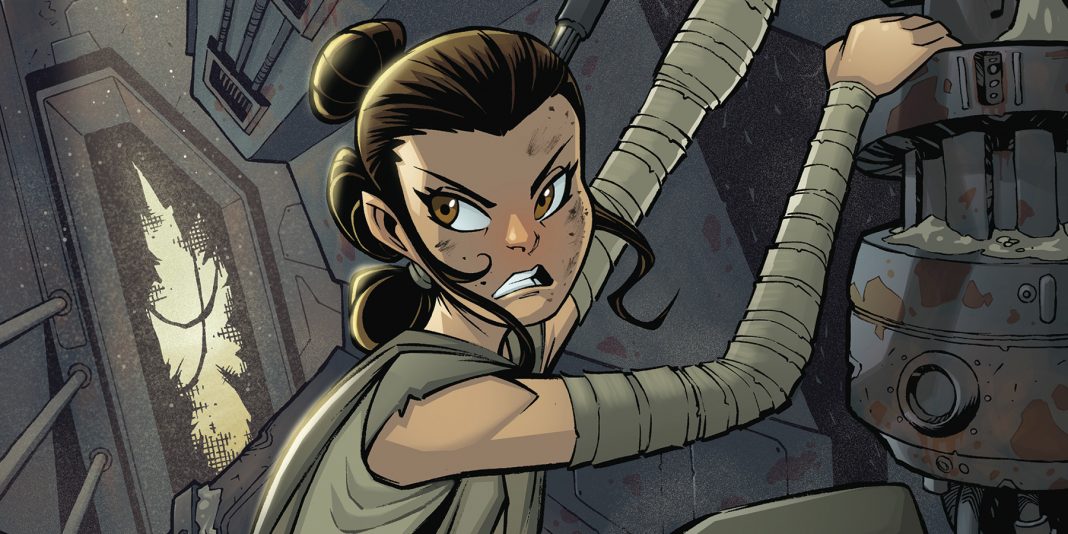 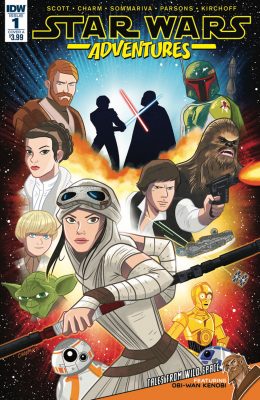 Hey Star Wars fans! Have you been waiting a long time to share both your love of Star Wars and your passion for comics with your youngsters? Well wait no more, your ship has landed. The masterful IDW has given you a new hope and a new chance to force your fandom on your poor innocent children. Luckily for you, there’s no way your kids won’t enjoy this super fun book. It’s full of great action, neat space creatures, and witty humor, all the things you loved/ still love from the Star Wars films. I guarantee that at the very least, they’ll think you’re a better parent than Vader.

So far the Star Wars comics being put out by Marvel have been fantastic! They could bring a smile to even the darkest of the Sith. However, the overall tone of these stories has definitely been geared towards older fans. That’s where this book comes in. Star Wars Adventures is an anthology series set to bring an array of tales from every corner of the Star Wars galaxy, and portray them in a fun exciting manner fit for all ages.

The first issue in this series takes us to Jakku (everyone’s favourite Tatooine rip off), for an exciting sand filled romp with a pre-Force Awakens Rey. We get to see more of her life as she takes on outlaws, rival scavengers, and wears those cool goggles I like. Then we finish things off with “Tales From Wild Space”, which will be the constant variable in each issue. This segment features a boy named Emil Graf, who travels around space charting unmapped planets with two droids and a monkey lizard. To pass the time (because his job is super boring), he recounts stories he’s heard through his travels. Conveniently for everyone his “tales” include well known characters (this time Obi-Wan) as well as teach important life lessons. Also, since everyone is related in the Star Wars universe. . . Emil is the descendant of the characters from “Adventures in Wild Space” which is a series of Star Wars Jr. novels also written by Cavan Scott.

The Force Is Strong With These Guys

It’s obvious that Scott has experience with the Star Wars universe. His stories deliver the exact entertainment level that has become simultaneous with this franchise. He brings the laughs, excitement, and action Star Wars fans crave, as well as faithfully portraying their beloved characters. Rey’s story is fast paced and our heroine is a spunky as ever. It’s true these stories are less complex and written in a way that guides the reader, but again it’s for a younger target audience. Having said that, it’s still exciting enough to keep you interested and wanting to know what’ll happen next. 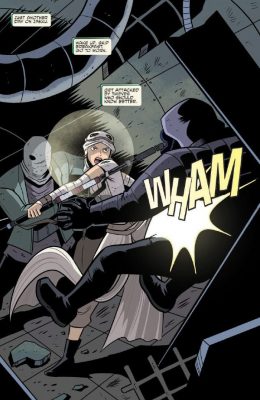 P.S. it’s a good thing to subject children to cliffhangers at a young age, it’ll make it easier for them to watch Netflix shows.

The art styles brought to this book by both Derek Charm (Powerpuff Girls: Super Smash-Up) and Jon Sommariva (Batman/TMNT Adventures), are the perfect fit for a series like this. Both styles are very cartoony and they make the action scenes really pop. The art reminds me quite a bit of the first Clone Wars cartoon that was on Cartoon Network. The very show that ruined Revenge for me, by making the characters way cooler than they were in the actually movie. Anyway, the art is perfect for a younger reader (or older) with a small attention span. There’s lots going on and tons of bright colors. Pages 6 & 7 are especially eye catching and I find myself looking back at them now and again while I’m writing this review.

P.S. Jon Sommariva’s variant cover is wicked! Look it up.

This IS The Comic You’re Looking For

So if you’re aiming for parent of the year, snag the little padawans a copy of Star Wars Adventures. I promise it’ll be a hit, and you’ll get a kick out of the read as well. Plus, as an added bonus it’ll lay the seeds needed to grow a devoted Star Wars fan. So pass on the Fandom and share your favourite galaxy with your favourite kid (and their sibling). Even if you don’t have kids, it’s still a fun read and a welcome addition to the Star Wars collection. If you don’t yet have a Star Wars comic collection, then grab last week’s Mace Windu and this weeks Captain Phasma. Three comics is a perfect way to start a collection.