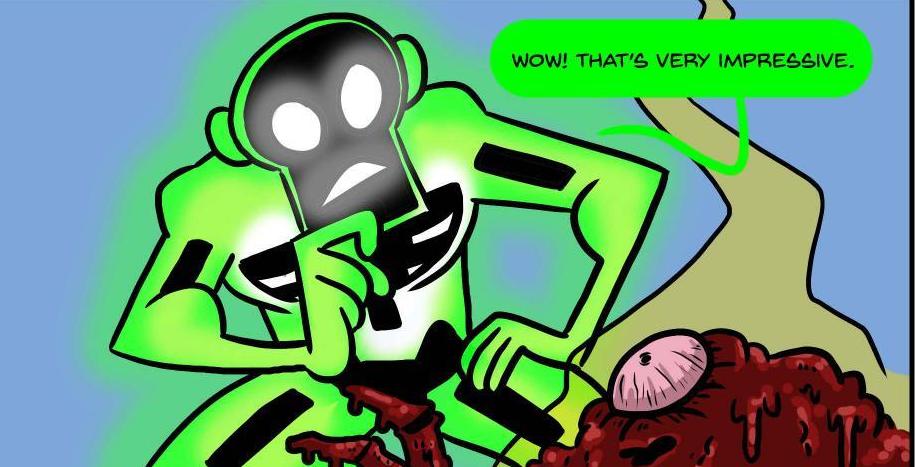 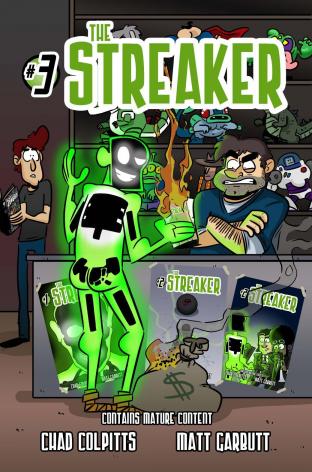 From the Writer: “Just another superhero here to save the world. Unfortunately for villains and citizens in need, he’s doing it without pants on. Not by choice though: he’s not one of those weirdos and he’s definitely not trying to make a statement. Nope, he’s just another man fallen victim to the incredibly cool incredibly fake side effects of radiation exposure. Now his skin burns everything he touches, his clothes burn off, he’s forced to be naked, and he glows in the dark.”

There’s only one thing to say here: this book is demented.  And not just a little bit.  It’s part Tom Green, part schlocky b-movie.  With each book, Chad goes farther and farther out into a field of glowing nakedness.  And the best part: it’s an enjoyable ride with a very unlikely hero.  However, this doesn’t change the fact that the author, Chad Colpitts, is a damaged young man.  His other book, B-Movie Garbage, doesn’t help with his image.  And it’s friggin’ great!

I Might Be Sick But In A Good Way!

One of the cool parts of these books is that you have NO IDEA where he got his powers.  It hints at it throughout the first three issues, but never really lets you in on the joke.  As well Streaker uses a very Deadpool-esque style of meta references to cover for some of the more commonly used tropes in comics.  It works well and ends up being quite entertaining.

The art by Matt Garbutt is awesome.  I’m a big fan of comic books looking like they can be directly ported over to TV series.  This feels like that.  The strong ink style with extremely bright colors would translate really well to other media.  And it fits the story extremely well. In addition, the lettering is really easy to ready with no odd colors etc.

Chad is a local writer.  And we cannot hold that against him.  He’s written a quirky, if not damaged, book.  And it’s totally worth it to pick up a copy (he’s compiled the first three books into a special “noir” version) or download them from the Alpha store.