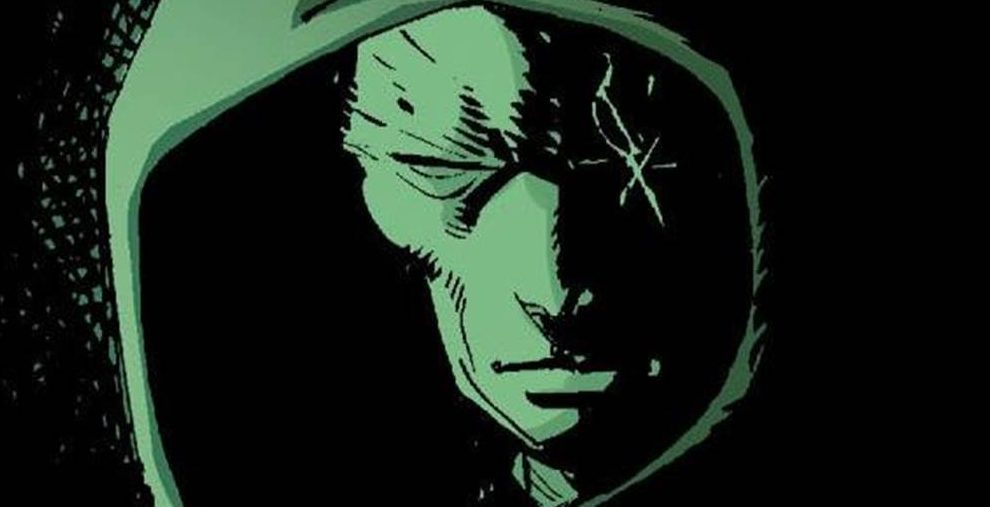 Whoa! . . . Superman can click his heels as much as he wants, but there is no coming back 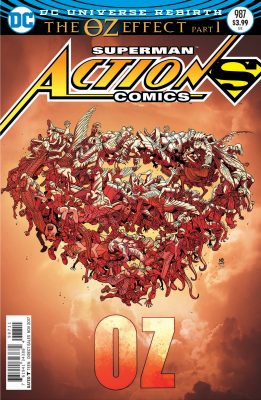 from the tornado of events this comic will unleash. Finally we learn the identity of the mysterious Mr. Oz, and it’s definitely not what I (or Superman) expected. Things for the last son of Krypton are about to change drastically. Which is bad for ol’ Clark Kent, but super entertaining for the rest of us.

All around the world humans are partaking in simultaneous acts of violent aggression. Are they somehow connected? Is Superman fast enough to stop them? Who is the man behind the hood?

Obviously I won’t unhood Mr. Oz in this review. That’s a dick move only the Dark Knight would approve of. However, I will say that he is revealed in this very issue. So no you don’t have to wait until part four. You still have to wait to see what will transpire from the big reveal though, but them’s the brakes.

Men Behind the Man

This book is written by the great Dan Jurgens, who once brought us a bad @$$ cyborg Superman as well as more important things like a certain Death. With his experience, it’s clear he knows how to form an entertaining Superman story. Luckily, he hasn’t lost his touch. He’s been setting this story arch up since the beginning of Rebirth, and things have fallen into place like one of Lex Luthor’s smoothly calculated plans. This issue starts off with a fantastically 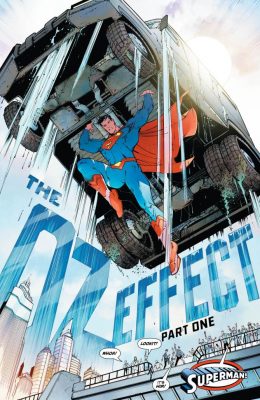 menacing Mr. Oz scene, and keeps building momentum up until the final aforementioned reveal. I can’t wait to read what Jurgens has in store for us! The mystery surrounding Mr. Oz is far from being solved, and the closer we get the more questions we’re sure to have.

In the art side of things, we have the work of Viktor Bogdanovic (New Super-Man). He has effectively brought us the style we’ve all come to expect from a Superman book. Giving us a clean cut Superman, who effortlessly thwarts the criminal element. His pages show us classic scenes of heroic feats, mixed with scenes of humankind at its most destructive. Making the readers ask themselves once again, “why does Superman even like us?” Bogdanovic’s art is pleasing for the eyes and paired nicely with the colouring work of Mike Spicer. Page 21 has my favourite “Superman is definitely better than you” moment. I’ve seen this kind of thing a million times, but it never gets old to me.

Get this book because it’s an exciting read and will most definitely lead into a thrilling not to be missed story arch. Everyone is sure to be talking about “The Oz Effect”, and if you don’t want to be spoiled then get in the know. Also, if speculation is right this along with the previous Batman/Flash story “The Button” is all connected to the “Doomsday Clock”. Which is sure to be a colossal DC event.

If you’ve been loyal to Action Comics rebirth then you absolutely can’t miss the big reveal! You’ve only been waiting for this since # 957 (no big). If you haven’t read any Action Comics prior to this that’s ok too. You won’t be too lost, and the ending will still seem important. It won’t lose it’s weight. If you’re still not sold on this issue, then take a look at the shiny and downright enticing lenticular cover. You know you want it! Plus, if you miss grabbing one there’s nothing you can do to change that. . . Unless you know how to fly around the world and turn back time.