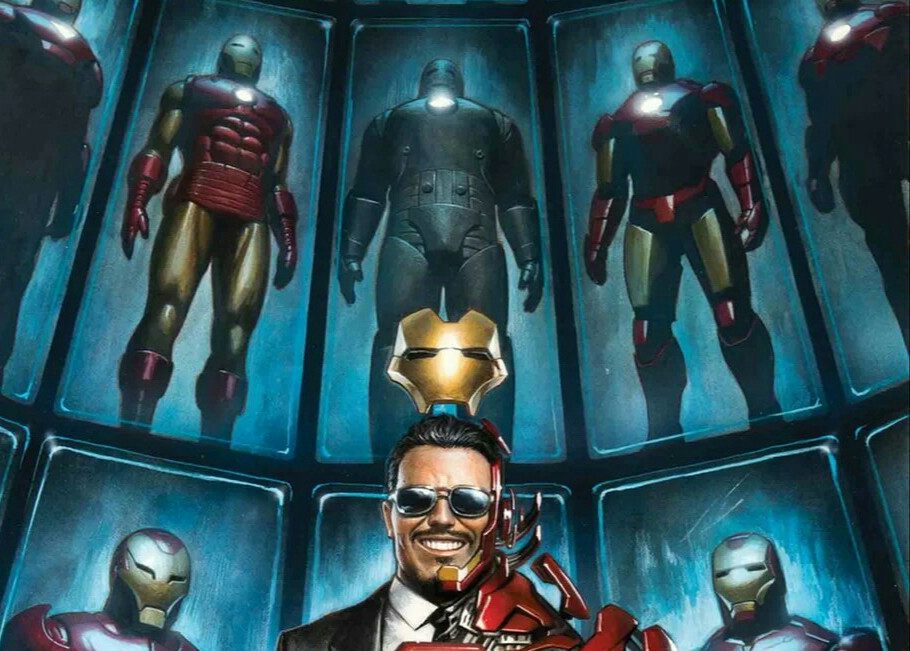 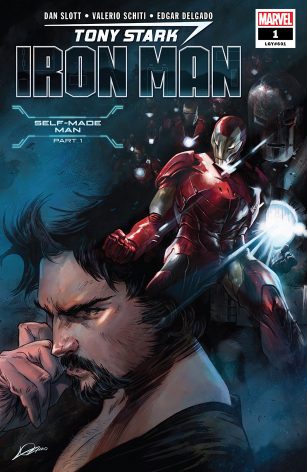 From the publisher: “TAKE FLIGHT WITH DAN SLOTT & VALERIO SCHITI! From the cusp of tomorrow’s dreams to the forefront of imagination, one man always soars on the cutting edge of adventure! You know his name. Tony Stark is Iron Man. And Iron Man…is an idea. Always changing. Always evolving. An idea without limit! The future is now. Strap in!”

We’ve been missing good old Tony over the last year or so.  I know we’ve had Tony as an A.I. in the Ironheart side trip.  However, it just wasn’t the same.  We needed Tony.  Tony also needed a serious writer to get rebooted.  And it appears that Dan Slott is the guy.

Tony needs to be that single and arrogant guy.  Tony also needs to be that guy who hides his emotions behind his bravado.  Slott’s Tony is exactly that guy.  The book starts off with a bit of back story much like the scenes at the beginning of Iron Man 3 at New Years.  Tony is at a robot competition and, no surprise, dominates at an early age.  Fast forward to current day and Tony buys the company created by his early competition.  And the new employee gets a first hand introduction into Iron Man madness on his very first day at work.

Solid Work On Story and Art

Dan Slott is fresh off his VERY long run on Amazing Spider-man (ending on #801 – out the same day as this book).  With the end of Parker Industries on ASM, Slott obviously had some rich executive/super hero stories to work out.  The good this is: it works very well with Tony/Iron Man.  The characters are exactly who they should be.  And as an added bonus – everyone has moved on.  There’s no MJ.  There’s no Friday/Jarvis.  There is no sign of IronHeart.  This is back to the Iron Man we’ve always loved.  Evolved.

The other exciting part of this book is the art.  It’s not as shiny as ASM.  However it works really well for Iron Man.  Story items in the foreground are super detailed.  However there is a lower level of detail throughout each scene.  This makes frenetic and action based scenes, like the GIANT IRON MAN vs GIANT MONSTER stuff easier to follow.  If they keep Slott and Schiti together, this could be a long run for Iron Man.