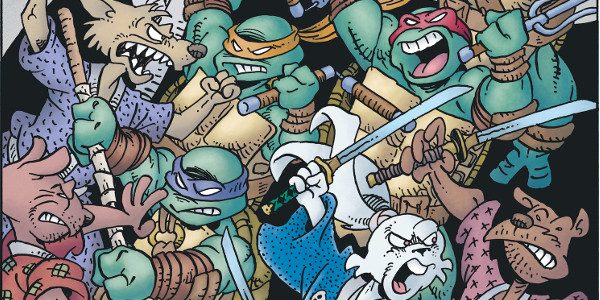 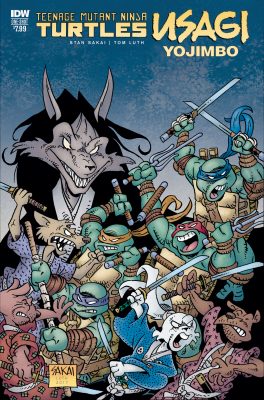 Teenage Mutant Ninja Turtles! Teenage Mutant Ninja Turtles! Heroes in a half shell. Turtle/Rabbit power! Yes this time there is a rabbit among the turtles, but don’t worry for he is here to teach us a lesson we all should know. That lesson is, that there is the way of the Samurai and there is the way of the Samurai Rabbit. I myself am partial to the latter, and after reading this comic you will be too.

It is time once again for Usagi Yojimbo to team up with the TMNT. Over the years they have appeared in each other’s comics, and Usagi has appeared in the Turtles animated series (all three) plus their toy line. I’d also assume that if Space Usagi the animated series had made it past its pilot, the Turtles would have made an appearance there as well. Which makes sense because these characters fit quite well with each other. Like Michael Bay and explosions or Bebop and Rocksteady.

What The Shell Is This About?

This time around the Turtles get summoned to Usagi’s world to help him on his quest to return a shard of magic stone to it’s rightful place. If the stone is not returned, his world will be torn apart by earthquakes. Kind of like the Dark Crystal, but laced with Japanese folklore and samurai action. The folklore attached to the story is soo great, and the visuals depicting it are fantastic. It’s hard to refrain from telling you about it. 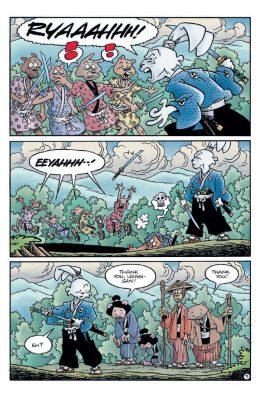 And Who The Shell Is Behind It?

Back at it once again is the creator of Usagi Yojimbo, Stan Sakai. Cool fact, Sakai started as a letterer and has worked on books such as Groo the Wanderer. From there he began to write and of course created this samurai sword swinging rabbit. His art style brings us a very inspired and cartoony version of Japan’s Edo period. The action is exciting and fast paced. Surprisingly with all the fighting and swordplay, this book is not gory at all. Death blows are depicted with grunts and skull face filled thought bubbles. This is actually pretty refreshing to see nowadays when most comics or movies use an excess of blood and gore.

Sakai also hits it out of the park with the facial expressions and mannerisms of his characters, especially the villain Jei. He is eerily creepy in the way he bares his teeth and tilts his head. He also has a really bad @$$ weapon, that you would not want to be poked with.

The End Of Our Journey

I’m always happy to read a TMNT team-up book, mainly because I have yet to read anything TMNT I didn’t like. However having said that, I can honestly say the IDW turtle team ups of late have been top notch! If you don’t believe me, track down the 2015-2016 Batman/Teenage Mutant Ninja Turtles. That series was sensational, and not just because of elephant Bane.

Anyway, this book is another successful team up and it’s almost unfortunate that it’s a one shot. At least it gives Turtle fans another great outing, and it might give them a new character to invest in (and the other way around for Usagi fans). Both fans should check this out. However, if you’re a fan of neither here’s your chance to change that. This book should sway you, it’s too entertaining not to. When it does, there are two things you should do. One start following the ongoing Turtles series published through IDW, which is unbelievably good. Two, add the return of Usagi Yojimbo to your pull list. The series restarts in September with #161. Until next time, Cowabunga dudes!