Face it, humans suck! This is a well known fact, and should not be argued. Also, it’s well known that animals are great, and way better than people. However, animals are boring. You can only watch them lick themselves for so long before it becomes redundant. All this is exactly why Anthropomorphism is the greatest invention of all time. 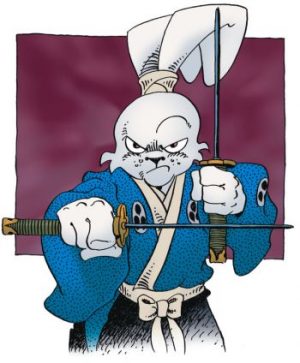 In honour of this revelation, I want to do a history on a walking talking critter I actually knew little about. The super cool, samurai sword swinging, rabbit bodyguard Usagi Yojimbo!

Usagi Yojimbo is a rabbit ronin who travels around an alternate version of Edo period Japan in which the human residents are replaced by anthropomorphic animals. Usagi wanders this land on a warrior’s pilgrimage, occasionally selling his services as a bodyguard. His journeying usually finds him in adventure after adventure. This character was created by Stan Sakai, and is slightly based on the famous swordsman Miyamoto Musashi. This series is well known for its many nods to Japanese cinema, history, and folklore. The lore part is especially alluring to me, because nothing is cooler than seeing this bad @$$ bunny take on mythical creatures.

Usagi Yojimbo first appeared in “Albedo Anthropomorphics” #2 published by Thoughts and Images in November 1984. Then he went over to Fantagraphics where he appeared in 11 issues of their Anthropomorphic Anthology series “Critters”. Usagi’s popularity lead to Fantagraphic publishing a “Summer Special” in October 1986 (which technically isn’t summer) and eventually his own series in July 1987. This series ran for 38 issues plus three colour specials, until once again this rodent hopped to a new publisher.

That new publisher was the one and only Mirage Studios, who brought us the Heroes in the Half Shell 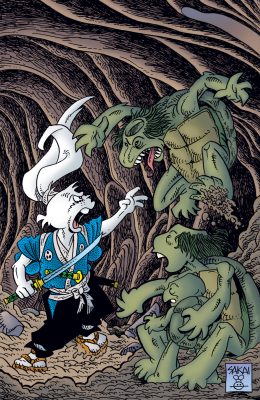 (Cowabunga Dude!). This wonderful ooze-flinging publisher put out a 16 issue run from 1993 – 1994. After this run, Yojimbo changed publishers, for what seems to be the final time. Volume Three was published by Dark Horse Comics with a count of 160 issues plus two specials and a one-shot titled Grasscutter. This series first ran from 1996 – 2012. Then it was followed by a Dark Horse mini called Usagi Yojimbo: Senso, where Miyamoto Usagi battles aliens. In other words… booyah! After this mini, Volume Three returned again with issues #145 – 160 starting in May 2015 and ending December 2016.

Now comes the good news! Dark Horse is reviving Volume Three for the third time this very month! Hold your excitement for five more minutes, so I can tell you exactly when. Drumroll please . . . It hits shelves September 6th. If you’re at all interested in this character, do the right thing and add it to your pull list. Or don’t, but you’ll be doing yourself an injustice and no rabbit bodyguard will be there to help you.

Space . . . Where A Few Rabbits Have Gone Before

I can’t do a history of Usagi without mentioning Sakai’s space-tacular spin-off series Space Usagi. In this series a decedent of Miyamoto Usagi, runs around a futuristic feudal Japan battling bad guys, and dodging heat seeking shurikens. Need I say more? 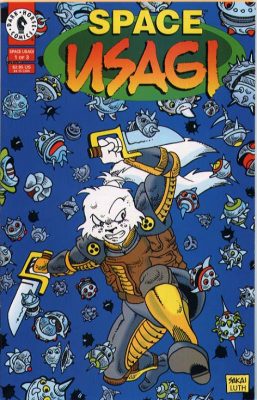 This series was published for two three-issue volumes by Mirage from 1992-1994. Then passed over to Dark Horse for another three issue run in 1996. It was also planned out to be a 90s cartoon series, but Mirage couldn’t find a toy company to finance it. Unfortunately, after being burned by the dismal toy sales attached to the poorly produced Bucky O’Hare and the Toad Wars, these companies were avoiding space rabbits like the plague.

Usagi Yojimbo is creator owned, which means he has appeared in a metric *beep* ton of random comics. Due to this article already being slightly less “brief” than advertised, I will just list the appearances that interest me and hope they interest you too.

Appearances In Other Media 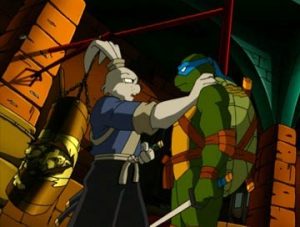